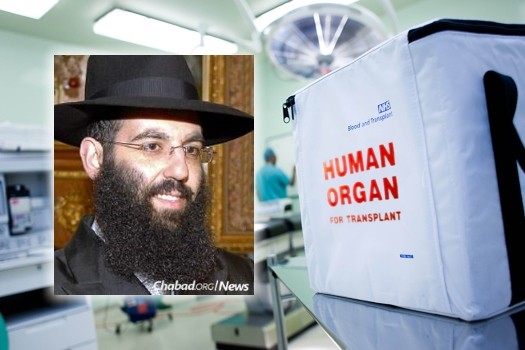 Rachael Eisenson is eager to go back to school. The graduate school-student from Smithtown, N.Y., is just one class shy of getting her master’s degree in web and multimedia design.

But right now, Rachael’s dream is just that, as she is in an intensive-care unit battling end-stage renal failure. Her family is searching for a kidney donor to save her life.

Adds her mother: “The most we can do is get the word out, and hopefully, someone will come through and be the donor who works.”

Lending a hand to raise awareness of Rachael’s situation and to encourage potential organ donors is Rabbi Boruch Sholom Wolf, co-director with his wife, Mushkie, of Chabad at the Medical Centers in New Hyde Park, N.Y. The Chabad-Lubavitch emissaries serve the 1,000 Jewish doctors and staff, as well as the thousands of Jewish patients who pass through each year.

Wolf has been raising awareness about kidney donations in Jewish communities by creating both print and social media campaigns highlighting specific individuals who are waiting for donors.

Rachael, he says, “is our most critical case.” No one in her family is a match.

Finding a donor, however, is not easy. Among other criteria, a potential donor must be in a great health and have a blood type that matches the patient’s.

First, however, a person must express interest—something many don’t consider because of misconceptions about what being a donor will mean for their future.

“A lot of people are worried that it will shorten their life if they donate a kidney, or that they will be out of commission for months,” says Wolf. “Neither is true.”

“If you don’t know anything about kidney donation, it is the scariest thing in the world,” states Wolf. “Who would want to part with an organ? But once you hear from someone who has done it and someone whose life is changed by having a new kidney, it becomes less of an abstract idea and more real.”

Being a living donor is something Wolf knows firsthand; he was 25 when he gave a kidney to a man who was then a stranger.

“I never thought I would be a donor—even a blood donor—because I’m afraid of needles,” explains the rabbi. “But I was tested for a bone-marrow donation by Gift of Life Bone Marrow Foundation. It didn’t require needles, so I figured I’d try, even though there was only a 1 in 1,000 chance I’d be a match. Then I got the frightening call that I was a match.

“The sheer terror turned into excitement when I realized I had this amazing opportunity to save a life,” he says. Ultimately, an even better match for the bone-marrow donation was found for the person in need.

“I felt kind of bad that I lost the opportunity to help,” he says, noting that when he heard about another Chabad-Lubavitch emissary who had donated a kidney—Rabbi EphraimSimon, co-director of Friends ofLubavitch of Bergen County in Teaneck, N.J.—“it got me thinking.”

When presented with an opportunity to donate his own kidney, Wolf agreed. He says he remains in contact with the man whose life he saved; they talk a few times a year. (Donors can remain anonymous if they wish.)

As for Rachael Eisenson, her family is hopeful that a match will soon be found, and that by raising awareness of her plight, it will help encourage people to step forward and be tested for thousands of people waiting for help.

“If people are made aware of the need,” says Deborah Eisenson, “it’s a good thing for everybody.”

Those with blood type O interested in being tested as a possible donor for Rachael Eisenson should call Rabbi Wolf at 516-360-0299.