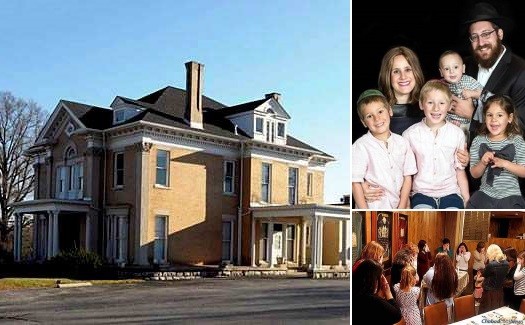 The South holds fast to its roots and traditions, an ideal practically synonymous with the Jewish people. So it’s not too surprising, then, that a population dwindling in the 1990s has re-emerged in the 2000s—so much so that the Chabad-Lubavitch couple on the ground there had to find more room to accommodate the community’s budding needs.

Over the course of the six years that Rabbi Shaul and Rosie Perlstein, co-directors of Chabad-Lubavitch of Chattanooga, Tenn., have served the local Jewish community, they were presented with a problem—a good one, but a problem nonetheless.

“The old facility was a bit too small; we’ve grown out of it,” explains the rabbi. And while it was acceptable, it lies in stark contrast to the upgraded venue they purchased a few months ago, which will serve as their new home base.

Acquired in February, the site is currently under renovation, with hopes for its completion in time for the High Holidays. Ideally situated, it is centrally located near the Jewish neighborhoods of Chattanooga, and lies in close proximity to both the University of Tennessee at Chattanooga campus and the UT School of Medicine at Erlanger.

The couple and their four children serve the local community, consisting of around 1,200 Jewish families—between 2,500 and 3,000 Jews—of a general urban population of nearly 170,000. “It’s a small community shlichus, and because of that we have to be multifaceted,” notes the rabbi. Still, it has its advantages: “It’s a wonderfully tight community. Everybody gets to know each other.”

Jews first settled in Chattanooga shortly before the Civil War.

According to the local Goldring/Woldenburg Institute of Southern Jewish Life, Fannie Schwartzenberg Bach and JacobBach arrived in Chattanooga from Germany in the 1860s. They started holding services in their home, primarily for Jewish soldiers who remained in the city after the war ended. Jacob Bach served as the congregation’s first lay rabbi, cantor,mohel (circumciser) and shochet(ritual slaughterer).

The Chebra Gamilas Chaced—Hebrew Benevolent Association—was organized in 1866. One of the first actions the group took was to purchase a parcel of land for a Jewish cemetery, also arranging for the bodies of Jewish soldiers fallen in the battles around Chattanooga to be exhumed and reburied there.

It was the start of a burgeoning Jewish life that included the first synagogue in 1882. Jewish peddlers from Eastern Europe went on to start a clothing business, dry-goods stores and a lumber trade.

Soon enough, the Jewish community of Chattanooga supported multiple synagogues, as well as numerous social clubs and activities. One of its most well-known citizens was Adolph Ochs, who bought a share in and over time boosted the local Chattanooga Times, and then led the way to his purchase ofThe New York Times in 1896. In the years that followed, he used his wealth and influence to build public facilities and buildings in Chattanooga, some still bearing his name, and the Ochs-Sulzberger family remained the newspaper’s owners until 1999.

The city boomed in the early years of the 20th century. It emerged as a major center for manufacturing and industry, earning the nickname “The Dynamo of Dixie,” according to the Goldring/Woldenburg Institute of Southern Jewish Life—and Jews played a significant role in that economic success. In fact, the Jewish population peaked in 1937 at about 3,800 residents.

Those years saw some local turmoil as well. In 1977, the Beth Sholom synagogue was bombed; fortunately, no one was inside at the time, and the Torah was reported unharmed. Years later, anti-Semite and former Ku Klux Klansman Joseph Paul Franklin was indicted for the crime.

The Orthodox congregation Beth Sholom was quickly rebuilt. It remained active until about three years ago when, faced with dissolution, it was acquired by Chabad. Today, it is run by Rabbi Perlstein as the Chabad shul.

The new millennium has boosted parts of the South, including Chattanooga. With the resurgence of the city’s economy and its downtown area, the Jewish community has seen an uptick, with as many as 3,000 Jews today. Many of them are young families who moved there because of business opportunities, according to the rabbi.

Still, when it comes to certain sectors of the population, Jewish life is admittedly sparser. Think college students: Tennessee is a more unusual pick for Jewish students seeking spiritual and cultural life than other schools in the country.

As an example, Perlstein reports that the dozen or so Jewish students he first approached at UTC were actually surprised to learn that there were other Jews on campus. They told him they had not even bothered to seek out any Judaism-related programming, expecting none to be found.

One young woman confided to him that she had thought attending UTC would mean “hanging up her Jewish cleats.”

And so, a new entity called “JewTC” was born.

Dubbed by the students themselves, it’s the name of the steadily growing program Chabad runs for the Jewish young men and women there. Programming includes lunch-and-learns, community work and social outings, such as canoeing trips, bowling excursions and kosher barbecues. In fact, the Perlsteins have been talking with Erlanger CEO Kevin Spiegel about creating aShomer Shabbat medical-intern and resident program.

Chabad of Chattanooga’s new facility is comprised of two wings—one that will be used for prayer services including a social hall and commercial kosher kitchen, the other for a learning center. Down the line, space may be converted for student housing. There is also a building on this property that will allow for the construction of a mikvah.

Of the new property, longtime area resident and local deli owner Bruce Weiss, who has been involved with Chabad for six years now, says “it’s very beautiful—kind of a turn-of-the-century building.”

Discovering the availability of the new location was a story in itself. Upon their initial move to Chattanooga from New York in 2009, the rabbi and his wife had spotted the building while driving around the neighborhood.

“I just commented and said, ‘Imagine one day Chabad of Chattanooga being there,” recalls Rabbi Perlstein. “And we laughed.”

At the time, the couple had been looking into another property and had hired a realtor to help with the sale of the current place. The rabbi says he told them: “There’s another property about to go on the market. Just look at it; it’s the perfect building.”

Upon learning that it was the very same place they had seen six years ago, the Perlsteins got excited. “Right after it went on the market, we tried figuring out any way we’d be able to buy it because it was above our price range,” acknowledges the rabbi.

The property had been on the market for three days when the rabbi joined the auction, but he was outbid and watched as the building went under contract for much more than the asking price. He figured this was the end of it, until the purchasing group was unable to close the deal.

“I was able to convince them not to put it back on the market,” continues the rabbi, “and that I would offer the same amount, but have a better chance of closing than anyone they’d try to sell it to.”

The deal went through.

Now the Chabad couple currently faces the reality of having landed a much larger and more expensive acquisition than originally intended, even though they have money from the sale of their existing property, in addition to donations from generous patrons.

The size of the project is daunting, accepts Perlstein, but “definitely worth it.”

“The rabbi told me his mission was to bring Jewish learning into the area,” says Joe Prebul, a car dealer in his 50s who has been involved with Chabad for four years now. “I believe that finding this particular facility has enabled him to grow that mission of what he originally came here for.”

With the property located within a couple miles of law offices, medical offices and businesses in town, part of that mission will include inviting professionals to lunch programs, classes, holiday events and minyans (prayer sessions).

On the flip side of the age sector, the 30 children in Chabad’s state-of–the-art Hebrew school will have improved amenities to draw more families in.

With renovations underway, veteran community members like Stanley Nusbaum can’t wait to see the final product. More than that, he says: “I hope this new building will help the congregation grow even more.”