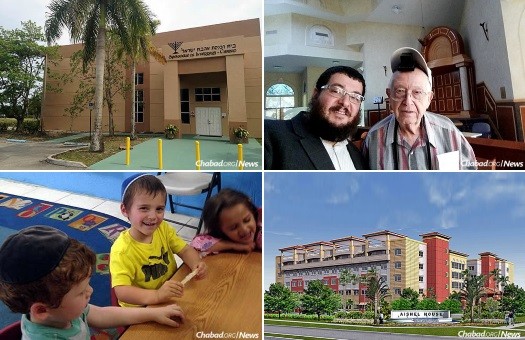 Bernard Baumgarten of Sunrise, Fla., says his situation is all too common. Past his 90th birthday, he is looking for a place to live where he and his wife, Lily, can enjoy the rest of their golden years without having to bother with shopping or cleaning. And he also doesn’t want to compromise their religious ideals: He wants there to be a synagogue close enough for them to walk to on Shabbat and Jewish holidays.

Baumgarten says he’s pinning high hopes on Aishel House, a proposed assisted-living community to be constructed on land adjacent to the Synagogue of Inverrary–Chabad in Lauderhill, Fla., where he currently prays and attends functions throughout the week.

In addition to supplying glatt-kosher food—the only option for religious Jews like the Baumgartens—the location of Aishel House will allow residents with limited mobility to be brought over to the synagogue for prayers and celebrations.

An additional bonus will be that children from Chabad’s preschool and youth groups will regularly visit and interact with the seniors to forge mutually beneficial relationships. Research and anecdotal evidence have shown that both groups thrive on such interaction.

In fact, the intergenerational programming concept is a trend that’s taking root in the United States, having been prevalent in other countries for years now, including Israel.

“It would be heaven sent for us,” says Baumgarten, who relocated from Brooklyn, N.Y., to South Florida 25 years ago. “Thank G-d, we can both look after ourselves and I can still drive, so we do not need to live in a nursing home, but there really aren’t any assisted-living facilities in the area that cater to observant Jews such as ourselves.”

“The inspiration for Aishel House,” explains Rabbi Levi Chanowitz, director of development at Chabad of Inverrary, “came to Rabbi Aron Lieberman, who has led our congregation since 1982. Over the years, he has seen many congregants grow older and saw the acute need for an assisted-living facility that would allow them to maintain the high level of Jewish involvement they’d grown accustomed to.”

According to plans, Aishel House will consist of 127 units, including 38 of them specially designed and operated for individuals with Alzheimer’s disease. The facility, which is expected to open in January of 2017, will be operated by MJM Associates, described as a leader in providing high-standard therapeutic living conditions.

Lieberman—co-founder and current president of the Orthodox Rabbinical Board of Broward and Palm Beach Counties, and regional director of Chabad in the Greater Fort Lauderdale area—will serve as a consultant on all matters, religious and ethical. He is tasked to ensure that the facility run in accordance with Torah values, and that it will serve as an attractive option for those seeking to live in a wholesome Jewish environment.

At the same time, Chanowitz is quick to point out that the new entity will offer the same open-door policy that typifies the Chabad House experience: welcoming Jewish people from all backgrounds and levels of observance, as well as non-Jews.

With the facility in the final planning stages, Chanowitz reports that interest is steadily growing in the senior community.

“People are excited; they’re calling and they’re asking” about it, he says. “There is a real need for this kind of solution, and we look forward to being there for our seniors in this stage of their lives.”