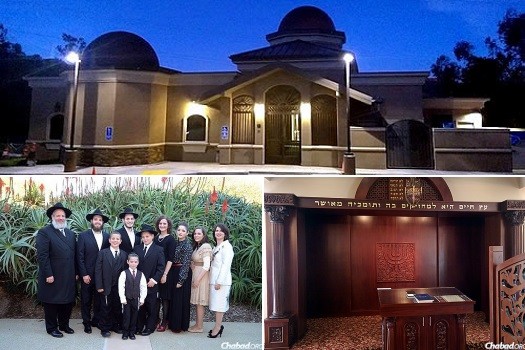 Chabad at La Costa in Carlsbad, Calif., has hosted plenty of activities in its 25 years of existence. The past, though, is nothing compared to what the future holds, thanks to a major construction project that took the center from a small, old wooden building to a modern, two-story structure with room to grow.

“This building will allow many of our members to fully experience the lifelong dream of a gorgeous sanctuary evocative of the traditional European synagogues of yesteryear,” says Rabbi Yeruchem Eilfort, co-director of the Chabad House with his wife, Nechama. “Deep warm colors and richly carved synagogue furnishings will help create an inspirational atmosphere to match the pride and dedication to Judaism this community exhibits.”

Jonathan Rozansky, vice chairman of the building committee, notes that “the previous shul was extremely small, maybe 1,600 feet, and it was somewhat of a deterrent for a lot of people. By creating a new shul, we will strengthen the Jewish community here.”

Rabbi Yonah Fradkin, regional director of Chabad of S. Diego, brought the Eilforts from Brooklyn, N.Y., in the summer of 1990 and helped them establish Chabad at La Costa. The couple started offering programs andShabbat services from their suburban home, but quickly outgrew the space. They found a small property and building next to the popular Omni La Costa Resort & Spa and were on their way.

Yet the size of the building meant that they were limited in their scope of activities. For instance, they couldn’t offer large-scale gatherings or even popular programs like the holiday-oriented “Shofar Factory” or “ModelMatzah Bakery” workshops. Even their Hebrew school had to be held elsewhere.

When the synagogue was bequeathed a gift by a former member in 2008, the Eilforts were able to pay off the mortgage on the synagogue and purchase a plot of land adjacent to the property. What they still didn’t have, however, was a building big enough to fulfill all of their programming aspirations. And with America slammed by a recession that September, disposable income was suddenly not so available.

So when the rabbi went back east a year later, in the fall of 2009, for the annual Kinus Hashluchim—the International Conference of Chabad-LubavitchEmissaries held in New York—he made a stop that he believes changed the course of his shlichus.

“I went to the Ohel,” the resting place of the Rebbe—Rabbi Menachem M. Schneerson, of righteous memory—“and asked for a bracha [blessing], that something exciting should happen and that we should grow the community.”

A week later, Bentzion Novak of Los Angeles told Eilfort about a government auction in his area for modular buildings that had no bidders.

“They were huge, pristine buildings with high ceilings,” which countered the image most people have of modular buildings, explains the rabbi. Not only did the Eilforts win the auction, they got the buildings for a mere $25,000.

Of course, other costs include the property itself—land does not come cheap in California—and the labor for putting the building together and added construction. Once fully complete, the new space will measure 12,000 square feet. An eventual finished basement will house the preschool, a youth center, a library and more, expanding their options even more.

“The community support has been tremendous, thank G-d,” says the rabbi. “Originally, this was supposed to be a $750,000 project. We, as a community, decided to ‘go all in’ and greatly expanded the plans. When all is said and done, this will be a $3.5 million project. The vision and generosity of our community and friends has allowed this to take place—and all without incurring a huge mortgage.”

Already, the building has proven popular. Anywhere from 50 to 80 people regularly attend Shabbat services. A number of them come during the week fordavening, and the rabbi is working on getting a daily minyan.

“I’ve brought new people to the shul, and they have really enjoyed it. They thought it was beautiful,” says Rozansky, who has been involved with Chabad at La Costa for four years now. “I’ve been reaching out to people who have moved into the neighborhood and let them know about it, and the feedback has been fantastic. It’s been rewarding to watch the community grow and embrace the new shul. The opportunities just seem to keep growing.”

For Sheila Lebovitz, a longtime supporter of Chabad at La Costa and a professional chef who used to run a restaurant and catering business in the area, cooking in Chabad’s old kitchen came with many challenges—namely, a residential-size fridge and stove, and what she calls a “teeny-tiny” workspace. Given that Lebovitz and several other women cook elaborate meals there for the weekly Kiddish, the new kitchen has been a blessing.

“It is a restaurant-style, commercial kitchen,” says Lebovitz. “We have two six-burner ranges, four ovens and enough space to be able to prepare food for nearly 400 people.”

Coupled with plenty of event space—thanks to a social hall and large patio—Chabad of La Costa can now host all kinds of celebrations, including two engagement parties for the Chabad couple’s children so far (two of them have gotten married in the last year, and a third is set to do so this week on Lag BaOmer.)

From the kitchen to the classrooms, every space was well-thought-out and designed to be aesthetically appealing, according to those close to the project. Many credit that to local resident and synagogue supporter Brenda Joseph and her family, who have followed in the footsteps of her parents, Bill and Julie Brunelle.

“She is also an absolute magician when it comes to decorating and planning,” says Eilfort. “She and her family are absolutely amazing and very generous with their time, energy and resources.”

“She took care of everything—designed everything—and it is the most beautiful sanctuary,” concurs Lebovitz. “The rabbi raised every penny, and we have this magnificent building to show for it. It is just something we hoped and hoped for, and now it’s come to fruition. It is just beyond words.”