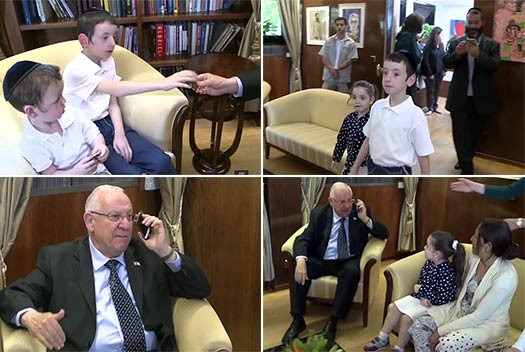 Just a day after they arrived in Israel, the children of Rabbi Chezki and Chani Lifshitz met with Mr. Reuven Rivlin, the President of the State of Israel. While there they also got to speak with their parents, who are in Nepal tending to the needs of the many that were impacted by the recent devastating earthquake.

The Lifshitz children, Shmuel, Rivky and Yitzchak, returned to Israel after spending days in the Chabad House with hundreds of other survivors. Without running water and diminishing supplies, it became unsafe for them to remain in Nepal.

Yesterday, together with the first wave of survivors, they returned to Israel to stay with their grandparents, while their parents remained behind to continue giving assistance to those in need.

During their visit, the president called their parents in Nepal for a brief and emotional phone call, despite the technical difficulties. After the meeting, they received a tour of the office of the president and its surrounding grounds.

When young Rivky asked her mother on the phone when they will return home, she answered “very soon, there are still a lot of people who need our help. We miss you very much and will be back together very soon.”

The president praised them for their parents’ work, saying “what you are doing for the entire world, and especially for the Israelis in Nepal, is something extraordinary. You are working on the Jewish, Israeli and universal fronts, and the way you opened your home during a time of calamity is wonderful.”