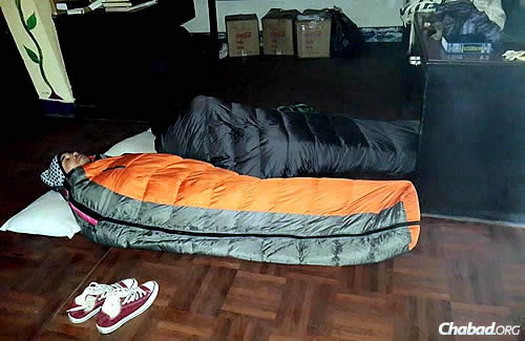 Settling in for another night at the Chabad House in Kathmandu, Nepal—co-directed by Rabbi Chezky and Chani Lifshitz—which has been serving as a makeshift crisis center and shelter after a massive earthquake struck Saturday near the nation's capital.

With supplies rapidly dwindling and nightfall settling over the nation, Chabad of Nepal continues to provide food and aid to those in need following a massive 7.8 earthquake Saturday that devastated the country and left much of the capital of Kathmandu in ruins.

“Chabad is serving hot meals to all comers every hour on the hour,” wrote Chabad emissary Chani Lifshitz on the official Chabad of Nepal Facebook page. “Kathmandu looks like a ghost town. Our electricity, phone service and water have been cut off, and little by little, our staples are running out.”

Relief efforts are taking on a renewed urgency as many residents in Kathmandu and other areas are sleeping outside on dirt, gravel, anywhere—away from broken, teetering buildings. Rain is forecast for the city, with temperatures likely to dip into the 50s overnight. Temperatures elsewhere in the country, such as up at the mountain base camps where hikers gather, hover at around 30 degrees.

Across Nepal, more than 2,200 people are reported dead and some 4,500 injured in the aftermath. Those numbers are expected to rise in the coming days as rescuers get closer to the epicenter of the quake region and continue to pick through the debris. Avalanches on Mount Everest have stranded hikers and caused at least 18 deaths. Major aftershocks—the strongest measuring 6.7 on the Richter scale—are causing additional damage as the Nepalese government pleads for international aid to arrive quickly. There is little food, water or and shelter.

Many young Israeli backpackers tour Nepal after finishing their military service back home. Despite the fact that the Chabad House sustained some damage, they have turned it into a crisis center and shelter, providing food and lodging.

“We are still here at the Chabad center (making a makeshift refugee camp, as it were),” Chani Lifshitz wrote online at 4 p.m. local time today, adding that “every effort by each and every one of you to help in any way will be greatly appreciated, whether it’s materially or spiritually … .”

Indeed, Facebook in particular and social media in general have become crucial in getting out the word about in the dire situation in Nepal. As more than 150 Israelis remain unaccounted for, the Chabad couple is working with authorities and rescue organizations to compile updated lists of people who have either been found or remain missing.

Many have reported this to be the worst quake to hit the impoverished South Asian country in 80 years. The aftershocks have even reached neighboring nations.

Hospitals are overcrowded, with the government struggling to keep up with the wounded.

Israel has pledged to help in any way it can. Two El Al airplanes—one carrying medical personnel—are en route to Nepal. They are expected to arrive in the next few hours to help those on the ground and enable the evacuation of Israelis from the region, according to an airline spokesperson.

The Israel Defense Forces is also sending 260 trained personnel to deal with the earthquake’s aftermath. The military team will focus on search and rescue, creating a full field hospital that will be operational within 12 hours of landing. Other international aid workers and search-and-rescue teams are already on the scene or on their way as well.

Sadly, this is not the Lifshitzes’ first brush with tragedy. Following a sudden blizzard in October that killed four Israelis and trapped some 250 others in the mountains and surrounding area, the couple became an essential link in assisting families with contacting their loved ones, providing basic supplies to those in need and visiting the injured at local hospitals.

They were also involved with the efforts to return the bodies of two Israeli women who were killed last year in a bus crash on a mountain road in Nepal.