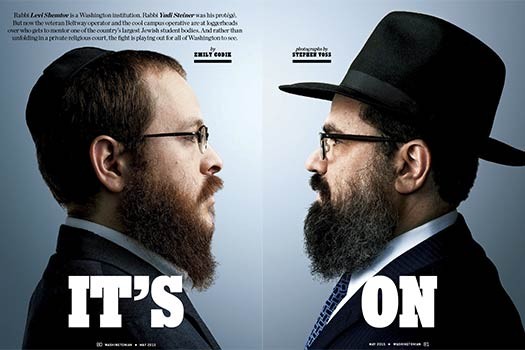 A Shlichus Feud in Washington, DC which spilled out into secular courts has been boldly profiled by the Washingtonian, a popular news magazine which gave its take on the fight between Levi Shemtov and Yudi Steiner.

Inside the Strangely Public War Between Two Top Washington Rabbis

Rabbi Levi Shemtov is a Washington institution. Rabbi Yudi Steiner was his protégé. But now the pair are at loggerheads over who gets to mentor one of the country’s largest Jewish student bodies.

by Emily Codik – The Washingtonian

It’s not the subject matter—two rabbis squabbling over who can lead the university’s Jewish students—that makes the scrum unusual. Nor is it the specifics of the quarrel, which has involved insults, name-calling, dueling religious organizations, and allegations of untoward, alcohol-fueled socializing. Rather, what makes the fight truly exceptional is where it’s unfolding.

Campus spats are regularly resolved in off-the-record academic committees. Feuds involving prominent political operators are typically swept under the rug by pricey PR firms. And face-offs between Jewish clergy, in particular, tend to be handled in private rabbinical courts.

But this battle, which involves all three, is taking place in DC Superior Court, for all the world to see.

Continue reading this article at washingtonian.com.

This article was originally removed at the behest of The Washingtonian, who requested that we republish it after their web-based version was made available.