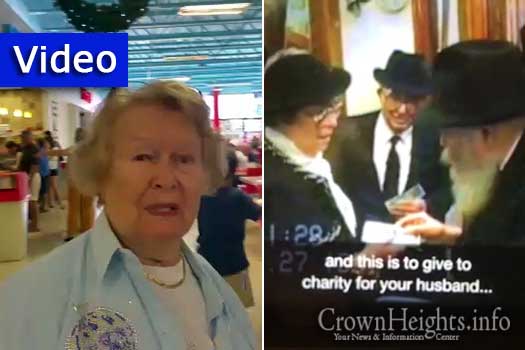 Following a Menorah lighting in South Florida, a woman approached Shliach Rabbi Shuey Biston and told an amazing story about a Brocha she received from the Rebbe for her husband who was to undergo a difficult surgery. Video of that encounter shows the amazing connection from the past to the present.

Following the lighting, Shluchim were distributing Menorah kits, dreidels and doughnuts when a woman approached and said that she met the Frierdiker Rebbe and also received a Brocha from the Rebbe before her husband was to go through a very dangerous operation.

On camera, Mrs. Berkowitz related how she met with the Lubavitcher Rebbe and told him of an operation her husband was to undergo and that it was a very difficult one, and she asked for a Brocha. The Rebbe responded not to call it a difficult operation – rather it should be an easy operation.

And so it was, after the operation he made a miraculously quick recovery.