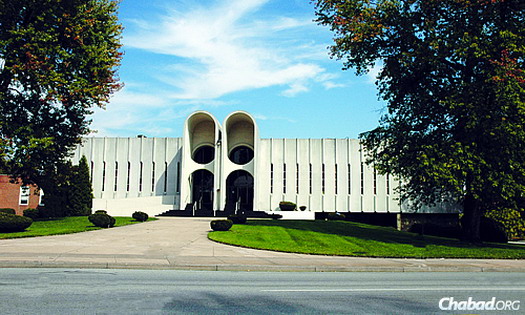 Cheder Chabad of Baltimore now occupies a former synagogue that was donated to the school.

It’s not often that someone receives a 55,000-square-foot building as a gift. But that’s exactly what happened to Chabad of Park Heights and its school, Cheder Chabad of Baltimore.

“We are in the process of inaugurating the building this year as the officialcheder,” teaching the basics of Jewish education and the Hebrew language to young children, says Rabbi Elchonon Lisbon, director of Chabad of Park Heights in Baltimore.

“Our experience highlights the centrality of chinuch—Jewish education—in the life of a growing community.”

And just as importantly, “we want to bring the miracle of our story to everyone’s attention, locally and beyond.”

Eight years ago, the school was just the brainchild of a handful of parents in the community who wanted to bring a Chabad chinuch (education) to their children, explains Lisbon.

It started with 10 preschoolers in the basement of one of the parents’ homes. The school originally catered to the children of Chabad rabbis who lived in the area and Chabad Chassidic families that had moved to Baltimore.

“The area is affordable, and there’s a lot ofYiddishkeit,” he says, noting the city’s significant and long-standing Orthodox community. That was the nucleus, he says.

But today, he notes, there is a mix of children: both Chabad and non-Chabad. The school now offers five grades for boys and two grades for girls, plus preschool, for a total of about 170 children.

Then it moved to a small house adjacent to the shul, and the school grew from 12 to 40 children.

“It was no small feat, but we did it,” says Lisbon, who credits preschool director Chanie Feldman with her tireless work and involvement along the way.

After a few more years, the school again outgrew its space.

At that point, administrators didn’t know what to do next. There was nothing readily available, says the rabbi, until he got a phone call from someone not affiliated with Chabad, telling him about a synagogue in the community that wasn’t being used anymore, and which could be an option for Chabad and its school. The owner, Dr. Paul Volosov, was apparently looking to do something positive with the building.

“So I called him up, and he invited me to take a look,” says Lisbon.

After the tour, Volosov invited the school to come the next year and try it out—rent-free. With the abundant new space, enrollment jumped from 40 to 80 kids in one year. The rabbi says he “also renovated part of the building so we could have nice classrooms.”

Then one morning about a year ago, Volosov called, telling the rabbi that he wanted to donate the building to them.

“The story of the school,” says Lisbon, “is really a miracle.”

Sheiny Rivkin, co-director of Chabad-Lubavitch of Towson, Md., with her husband, Rabbi Mendy Rivkin, have three of their four children—the oldest is 7—enrolled at the school, which is about six miles away. This is their fifth year there.

“The school started off like a small mom-and-pop shop, and it has grown so much,” she says. “It is really outstanding.”

She touts the staff wholeheartedly, in addition to the way all aspects of education include “the entire chinuch point of view,” even when it comes to crucial basics like motor skills. “They just understand how it’s going to affect children as they’re growing and learning to use their minds. Everything is very well-thought-out and guided.”

When learning about the Jewish holidays, for example, she notes that “the kids live it. They make everything hands-on.”

But it’s the school, they say, that has really revved up their work and access to the local Jewish community: “It has given us a presence and availability that have really expanded our reach,” says Lisbon.

Back home after attending the Kinus Hashluchim—the International Conference of Chabad-Lubavitch Emissaries in New York—Lisbon says he spread the word about the school there, and plans to use what he gained through various workshops and networking opportunities for use in his community. “It’s about focusing on Chabad’s strength in both outreach and inreach.”

“We didn’t expect it to happen so fast and so beautifully,” acknowledges the rabbi about the cheder. “It’s really a miracle.”