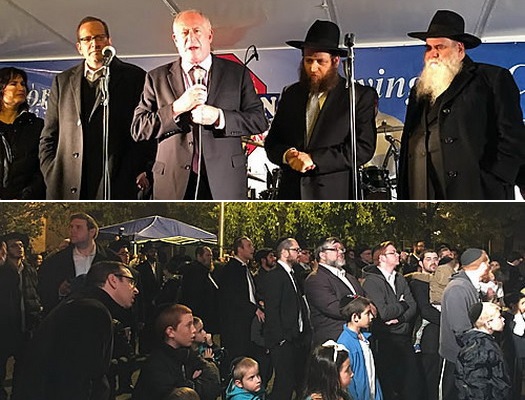 Every autumn, the corner of Whipple Street and Devon Avenue in the multi-ethnic Chicago neighborhood of West Rogers Park comes alive as hundreds of Jewish people of all ages join together in whirling circles—and dance, dance, dance.

And year after year, the dancers are joined by the top brass of the City of Chicago, as well as the State of Illinois. This year, Illinois Gov. Pat Quinn paid a visit to the festivities on Sunday.

In what is now a decades-old tradition, a celebratory crowd gathered on Oct. 12 for the annual observance of Simchat Beit Hashoeiva, a musical celebration of the Sukkot holiday. Since its inception in the early 1990s, the event—the largest of its kind in the U.S. Midwest—draws a lineup of Jewish superstars. This year’s featured performer was AriGoldwag, whose hit song “Am Echad” (“One Nation”) has topped the Chassidic pop-music charts.

What was also once solely an evening of dancing has in recent years developed into an all-day carnival featuring rides and hourly shows, a children’s concert and eye-catching family entertainment, such as the acrobatic Jesse White Tumblers, headed by Illinois Secretary of State Jesse White, who recently turned 80 years old.

A staple at the fair is also local cartoonist David Sokoloff, creator of “Mentchy the Clown,” who gamely churns out drawings and tales for eager youngsters.

Izzy Zirkind attended this year’s afternoon carnival with his four young children. “It’s a great way for our family to enjoy the holiday and enjoy the lovely fall weather,” says Zirkind, who recently relocated to Chicago from Montreal.

In addition to inflatable rides and refreshment stands that extended from a nearby parking lot along Devon Avenue towards the barricaded area of Whipple Street facing Congregation B’nei Ruven-Chabad—the event host—the synagogue itself was buzzing with festive displays, performances, crafting stations and more.

The food was co-sponsored by a group of individuals and businesses as diverse as the neighborhood itself, ranging from a kosher grocery to a fruit store owned by Serbian immigrants.

“The holiday of Sukkot brings us all together, and its message is one of unity,” says Rabbi Baruch Hertz of Congregation B’nei Ruven-Chabad. “This is a unique opportunity for the community to celebrate openly and freely, and really embrace everything this great country stands for.”