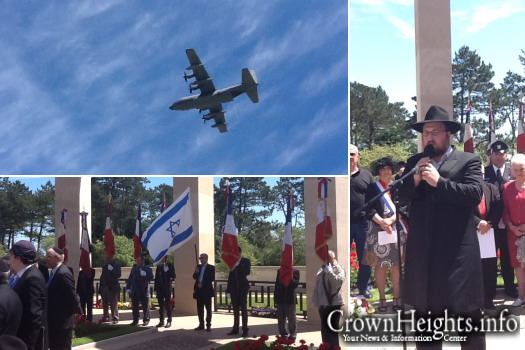 On Sunday, June 8, 2014, seventy years after the D-Day landing, several hundred members of the Jewish community of France met at the cemetery in “Omaha Beach”, Normandy. 149 Jewish soldiers are buried there. The traditional ceremony was held to honor the memory of Jewish soldiers killed as they landed to fight the Nazis in June, 1944.

This anniversary was a special moment for the memory of so many Jewish young men that went to war in order to bring peace, freedom and dignity of man to war-torn Europe.

The names of the fallen soldiers were read aloud, and Tehillim and Kaddish were recited. A Jewish choir led by Rabbi Raphael Cohen sang “keil malei rachamim” and other songs.

Following the ceremony, Rabbi Shmuel Levin, director of Chabad of Deauville-Trouville in Normandy, invited participants to join the writing of a new Sefer Torah dedicated exclusively to the memory of the fallen soldiers, both known and unknown.

In attendance were: Rabbi Yosef Y. Gorodetsky, director of the European Office of Lubavitch; Rabbi Yosef Y. Levin, director of the Chne Or boys school; Rabbi Moshe Lewin, Rabbi of Raincy and Executive Director of the Conference of European Rabbis; Colonel Lahav, the Israeli representative; Rabbi Uri Holtzman and Mr. Noah Holtzman of Chabad of Deauville; the President of the Jewish community in Caen; the Calvados MP; the Mayor of Caen and many other personalities.