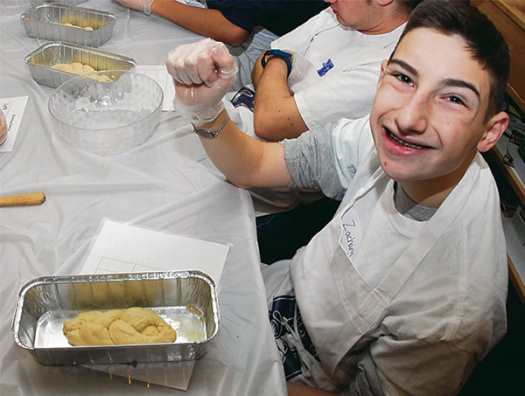 When Zachary Friedberg was born 16 years ago, his parents were told not to have hope that he could achieve much in life or even survive to his teens.

However, Dr. Rhonda and Michael Friedberg of Morganville took their son’s diagnosis of pyruvate dehydrogenase — a disease that prevents him from converting sugar to energy because of a missing enzyme — as a challenge.

His particular form of mitochondrial disease, which has left Zachary cognitively impaired, is so rare that only 250 children worldwide have been diagnosed with it since the 1970s. Of those, only two other youngsters that Rhonda Friedberg knows of have lived as long as Zachary.

“We’re just happy he is here and alive,” she told NJJN.

Through her efforts to find support for her son, Rhonda became involved with the Friendship Circle of Chabad of Western Monmouth County, which pairs teen volunteers with special-needs youngsters to provide companionship and socialization.

On Feb. 23, Friedberg was honored by Chabad of Western Monmouth County at its annual Women’s Day luncheon, which drew 330 guests to the Freehold Jewish Center-Congregation Agudath Achim.

Through her involvement with Friendship Circle and her advocacy for disabled youngsters, Friedberg said, she became aware there were few occupation opportunities for disabled adults. Several months ago she proposed that such employment be provided through the Friendship Circle. Working with its director, Chanale Wolosow, they established Loaves of Love; as its first project, challenged young adults baked hallahs for Shabbat that were sold to community members for about $6.

The goal is to eventually issue the participants paychecks from the profits of the sales; those who worked on the recent projects were given small compensation.

“I never could have done this without Friendship Circle and its support,” Friedberg later told NJJN. “It’s such a mitzva.”

Although the project is aimed at young adults, she has brought Zachary along to help out during the hallah baking and the group’s second project, preparing kosher party platters (which, Friedberg said, were “a big hit”). Even though Zachary “can’t eat anything we make because he’s on a special diet,” said his mother, “he loves to cook.”

The project involves several training sessions and the final baking or preparation session.

Explaining the challenges of working with the disabled, Friedberg said, “We had to teach them about cleanliness and putting on gloves, cooking…. It took them a couple of weeks. They were so excited and felt such a sense of accomplishment.”

The group is now engaged in the third project, preparing mishloah manot baskets for Purim.

“It’s such a big hit we’re practically sold out,” said Friedberg. “We’re almost up to 200 baskets and won’t be able to take many more orders. The community is really supporting them.

“We hope to go back to hallah-making after Pesach, but our real goal is to have a self-sustaining factory providing a variety of jobs for young adults,” which would include making party platters, baked goods, and dried fruit and nut baskets, said Friedberg. “That is our goal in the next few years so that these young adults can be part of the Jewish community and feel like they are worth something.”

After Friedberg delivered her speech at the luncheon, Liz Yigdal of Morganville, who owns a mailing and fulfillment business in East Brunswick, offered to donate the costs of shipping the Challah loaves anywhere in the country. “I thought as I heard her speak, ‘I have to do something to help her,’” she told NJJN.

Friedberg, an optometrist, and her hospital administrator husband have long fought for their son, who attends the New Grange School in Hamilton for students with severe disabilities. He reads at an elementary school level, although the local school district initially told them he would not progress that far.

The couple started the Zachary Foundation 10 years ago at the suggestion of their other son, Benjamin, 18; it has raised $300,000 for mitochondrial disease research. They also have a daughter, Rebecca, 11.

Friedberg tearfully recounted the joys and struggles of raising Zachary. “It was at his bar mitzva when he began to say some prayers that I started to believe he could accomplish something,” said Friedberg. “Even though I have lived with hardship, I realized how lucky I was to be his parent.”