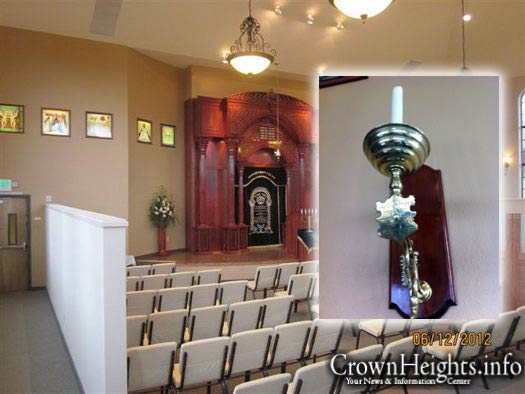 On a trip to the States a Shliach and his Mekuravim discovered a story behind a recent donation of a pair of candelabras to Chabad of Tacoma, Washington – and how timely that donation was.

Last week we took the children for a two day trip to the mainland. We started in Tacoma, Washington, where we saw the new beautiful Chabad Center. While touring the magnificent Shul, Rabbi Zalman Heber told us the story of the beautiful candelabras in the front of the Synagogue, a story I’d never hold back from you.

“When we announced the building of a new Shul” Rabbi Heber began the story “a family in the city told me that they would like to donate a special gift to the new house of prayer and asked if I’d come to see them”.

“When I came to their home they presented to me two very old looking candelabras.’They were from a synagogue in Amsterdam in the 18 hundreds, it was passed through the family and we feel that Chabad of Tacoma is the perfect home for it'”.

“I held these beautiful pieces with great emotions and thanked them on behalf of the community for this remarkable gift. In front of the candles were the original plaques with Hebrew words. I quickly got a cloth to clean them and saw the dedication of the donor. They were right, it was donated to the synagogue in Amsterdam in 1791, but when I saw the way it was written I nearly fell in amazement: שנת תקומה. The Jewish year is written many times with the Hebrew letters representing the numerical value of the year. The word they chose for the year was “Tkuma” which means “rebirth”, but the same letters can also be read as “Tacoma”, the city which is now the new home for the candelabras.

“I explained it to the family who was astonished at the divine providence, yet filled with joy that they had done exactly what was meant to be.

“And for me” continued Rabbi Heber, “It gave exactly the strength I required. We were going through financial difficulties to complete the project and I got the sign I needed. It may be a great effort to pull it all together, but it is more than worthwhile. Our Shul is part of the long history of our people; a rebirth of the Amsterdam Synagogue in Tacoma”.