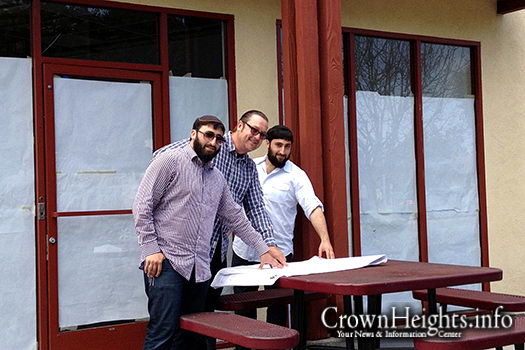 REDONDO BEACH, CA — When Rabbi Yossi and Shterna Mintz opened their fledgling Chabad center in Redondo Beach, Calif., people told them it was a lost cause, saying that no Jews lived there. Seventeen years later, with a new kosher restaurant under construction and Hebrew day school on the horizon, the community has grown and developed beyond their wildest imagination.

The restaurant, slated to open in July, is the brainchild of two brothers, Abe and Levi Chayo.

“My brother lives in Redondo Beach and works in Torrance,” a nearby business district, says Levi Chayo. “I was living in New York at the time, and he told me that there are many Jewish people in his area who keep kosher, and they could really use a kosher restaurant. I decided to go for it.”

But the 21-year-old had no experience in the business and knew he would need to beef up his hospitality know-how before opening up his own place. After working in a number of Brooklyn restaurants for a number of months, he felt he was ready to take the plunge.

So Chayo flew to Torrance and started planning. “Even though there are a fair number of kosher businesspeople and families in the area, we are working on making food so memorable that we will be able to compete with the non-kosher restaurants as well. We plan on baking all of our own bread and pizza dough in-house, and will be importing exclusive chalav Yisrael cheeses from the East Coast,” he said, referring to dairy products produced under the constant eye of a religious supervisor to ensure that kosher standards have been maintained throughout the production process.

The restaurant, to be named Chayo Eatery, will offer dairy and vegetarian dishes.

Shmuli Pinson, CTO at a nearby high-tech firm, says “it will be nice to have a kosher place to go for lunch meetings or even just to grab a quick bite during the work day.”

Mintz, who co-directs Chabad of the Beach Cities (Hermosa Beach, Manhattan Beach and Redondo Beach), explains that although the restaurant is a private venture, it dovetails with Chabad’s mandate to encourage more Torah awareness and observance.

Keeping kosher is a crucial step

At a public gathering in the summer of 1975, the Lubavitcher Rebbe, Rabbi Menachem M. Schneerson, of righteous memory, urged those present to encourage and facilitate observance of the kosher dietary laws, as part of his 10-point mitzvah campaign. The Rebbe explained that keeping kosher a crucial step toward living a Torah lifestyle; whatever a person eats has an effect on his or her thoughts, emotions and outlook, he said. At that time, the Rebbe offered to pay half of the expenses incurred during the koshering process, whereby a kitchen is purged from any unkosher traces and dedicated for exclusive kosher use.

Mintz says having a restaurant to recommend will make it much easier for him to guide people to kosher observance: “I can now tell people that if you can have a kosher lunch delivered, why would you eat unkosher?”

Chip Herwegh echoes that point. “Until now, there really were no options other than preparing and eating everything at home,” he says. “We have been talking about this for years. Having a kosher restaurant right here is going to make it much simpler for me to go kosher. This is a very important step in community-building.”

A native of Manhattan Beach, Calif., Herwegh first became acquainted with the Chabad center when he married a Jewish woman. As the family became more involved in Judaism and their three children enrolled in the Chabad Hebrew school, Herwegh underwent conversion. He chose the Hebrew name Gavriel Noach, after Rabbi Gabi Holtzberg, director of the Chabad house in Mumbai, India, who was murdered in the November2008 terror attacks there, along with his wife, Rivkah, and four guests.

“Gabi was out there spreading light, and I hope to be able to do a little bit of that as well,” says Herwegh, one of the principal organizers and funders of the restaurant.

Mintz sees the new establishment as a real milestone.

“Over the years, our community center in Redondo Beach has expanded to include three rabbis and 56 other employees,” he explains. “Our center offers a mikveh ritual bath, a synagogue where hundreds pray regularly, a preschool with an enrollment of over 140. Our satellite center in Manhattan Beach has a Judaica store and a full array of Chabad activities from Torah classes to clubs for seniors and toddlers.

“Yet having a kosher restaurant in Torrance is something that we could have never imagined.”

Levi Gelb, an entrepreneur-writer who grew up in the area, says: “When I was young, we had a little congregation in a storefront, and we would drive to L.A. to have anything Jewish. The fact that our community can support a kosher eatery tells me that the area has really come a long way. There are a lot of young families, and people are moving in. It is becoming a real community.”