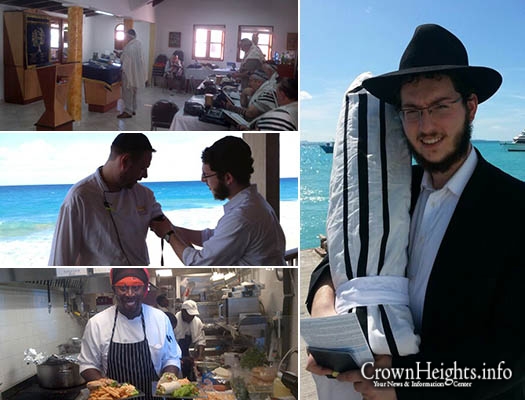 Tefillin and Kosher Cuisine in the Caribbean

A new buzz was in the air about kosher cooking. Ever since Bevis Marks The Restaurant opened its doors for business in 2003, adjacent to Britain’s oldest synagogue, the food world has been flocking to its tables to enjoy the groundbreaking recipes of of Jason Prangnell’s dairy-free kosher cuisine.

Drawing on both the Sephardic and Ashkanazic traditions as well as modern European food influences, he has established his cooking as the benchmark of what modern Jewish cooking can aspire to. Jason worked in a minimalist kitchen in the basement of the synagogue, he produce recipes are succinct and cookable and ideal for the home cook.

As the years went on, Jason produced a Kosher cookbook, with a beautiful layout and photography, confident and sure that is will bring Jewish food soaring into the 21st century.

During this era of Jason’s life, he had no idea that he was Jewish but had pleanty of knowledge about Judaism and especially about the Jewish obsession with food. He was surrounded by Jews all day, worked next door to a Synagogue, served and dined with Rabbi Lord Jonathon sacks and had never imagined or dreamt of being Jewish.

Since then he has left the restaurant. He has traveled internationally to cook in all exotic areas and also to be the personal chef for many people who swear by his cooking, including the queen of England and the Obama’s.

Currently, Jason Is working as Chef at the Viceroy Anguilla resort in the Caribbean. He works together with Rabbi Moishe Chanowitz from Chabad of St. Maarten, the island nearby to provide kosher dining and religious services to the many tourist and visitors that will be staying at the resort.

Rabbi Chanowitz has recruited a few Bochurim to take upon themselves the task for this vacation season.

As the date of the main influx of Jews to the island nears, the staff had a meeting with the Bochurim Mendel Shemtov, Zalmen Raskin and Dovid Leib Marasow present.

During the meeting as an ice breaker, all present introduced themselves. Jason introduced himself as half Trini (Trinidad) and half English. Upon request for more background he said that his maternal grandmother was Jewish, thereby making him “Jewish by nature”.

The next morning he celebrated his “Bar Mitzvah” and laid tefillin for the first time with the waves crashing at shore behind him.