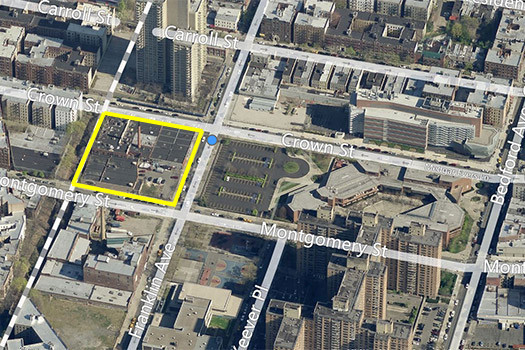 New construction plans have been filed for a massive, seven-story, 209-unit residential tower on Franklin Avenue in Crown Heights. The lot, which now holds a single-story linen-cleaning operation and warehouses, will be demolished to make way for the 168,000 square foot development.

The property, located at 902 Franklin Avenue and spanning from Crown Street to Montgomery Street all the way to the ‘shuttle’ train tracks, has been a commercial laundry facility since 1935, but the property is zoned for residential and can accommodate a building up to 7-stories or 70 feet tall. The last laundry company to occupy the site filed for bankruptcy in the fall of 2013.

The land was purchased in April of 2014 from Central Laundry Service by Cornell Crown LLC for $14.25 million.

New York YIMBY reported that initial permits for a massive residential development have been filed with the city. The filing reveals plans for a 7 story, 209 unit, 168,000 square-foot residential building – an average of 800 square feet per apartment.

The permit was filed by Karl Fischer, in the last few days that new projects can slide in under the 2008 building code. The application was submitted on behalf of North True Construction, led by Isaac Hager and also associated with Cornell Realty.

The cellar and sub-cellar would hold 120 parking spaces, about 15 more than required by the zoning code. The buildings would rise 70 feet into the air, the maximum height allowed in R6A zones.

This marks the first major project by real estate investors to cross over to the south side of Eastern Parkway.