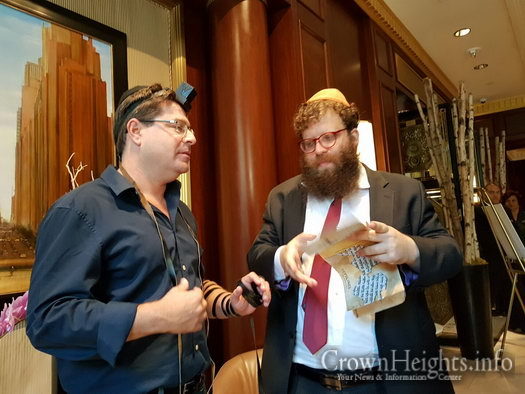 Israel ‘s Minister of Science, Technology and Space, Ofir Akunis, met with Yaacov Behrman of the JFA in New York this morning in New York, wrapped Tefilin, and spoke about the importance of the American-Israeli alliance and the support of the New York Jewish community for Israel.

Minister Akunis, who was accompanying Prime Minister Benjamin Netanyahu to the United General Assembly this week, said: ” I wanted to wrap Teffilin before continuing my journey to Washington for important meetings on behalf of Israel, since it empowers me and brings blessing.”

The meeting was arranged by Rabbi Levi Matusof from Paris, who was also in New York this week and usually puts on Teffilin with Ofir Akunis, but had to head back to Europe before Shabbos.