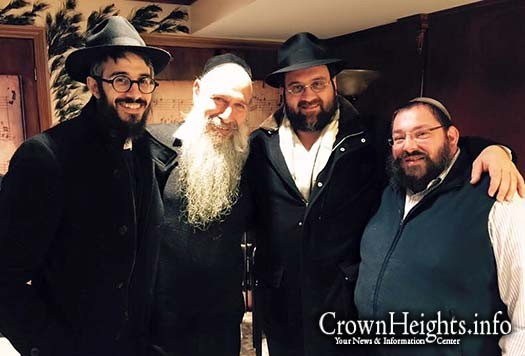 Once again Keren Simchas Chosson V’Kallah, the organization which helps hundreds of Chassanim and Kallahs get married each year, has partnered up once again with Jewish music legend Mordrechai Ben David who will perform in a special concert for men on their auction night on Motzai Shabbos, February 7th.

Last week KSCVK organizer Shmully Barshevitsky along with the evenings emcee Dovi Minkowitz and musician Fitche Benshimon met with MBD at his Seagate studio to record a promo for the upcoming event. The promo will be released in the coming days.

KSCVK, headed by Mrs. Devorah Benjamin with the help of Shmully Barshevitsky and Mrs. Laya Biggs, helps Chassanim and Kallahs pay the enormous expenses of their wedding day. They help hundreds of couples each year.

The auction event will take place on Motzai Shabbos February 7th 2015 which will feature the MBD concert, and the following day, Sunday February 8th will be the women’s event and will feature guest speaker Bridget Gabrielle.

You can already purchase tickets in the auction by visiting KSCVK.org