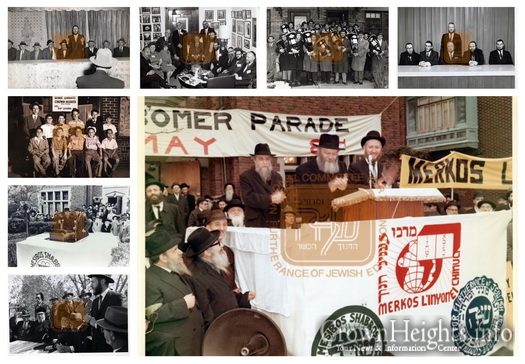 In honor of Rabbi JJ Hecht’s yartzeit on the 15th of Menachem Av, the National Committee for Furtherance of Jewish Education (NCFJE) has digitized their historic photo archive to be viewed by the public.

Rabbi Hecht served as the Executive Vice President of the Committee for close to 50 years until his untimely passing in 1990 at 66.

“The beginnings of Chabad-Lubavitch in America were established through the NCFJE (then the CFJE), which was responsible for the main Lubavitch programs of the 1940’s and 50’s like Released Time, Mesibos Shabbos, Anti-Shmad and children’s gatherings and parades” says Shimon Sabol, who spearheaded the project. “In the 1940’s Rabbi Hecht worked at the Rebbe’s side and under constant instruction and encouragement of Frierdiker Rebbe. Now these historic photos can be seen by everyone and appreciated in their context as the foundation of Chabad activities in America.”

“Especially impressive were the NCFJE dinners, which were grand, not-to-be-missed affairs attended by the ‘who’s who’ of dignitaries and politicians,” continued Sabol. “Those early events helped raise the prestige of Lubavitch in the eyes of the American public.”

Rabbi Hecht was also sent as the Rebbe’s ambassador to visit officials throughout the world, including the US, England, Australia and Israel. Many photos of those meetings are included in these albums.

A biography on Rabbi Hecht is also in the works, scheduled to be printed by next summer in honor of his 30th yartzeit.

If you have any photos or letters of Rabbi Hecht, to share a memory or story, or if you can help identify people in the photos, please email rabbijjhecht@gmail.com