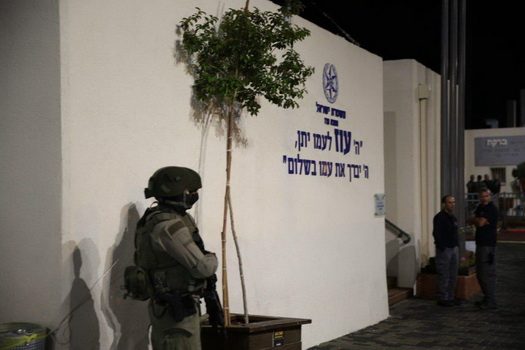 A terrorist carried out a stabbing attack at the Oz police station in the Armon Hanatziv neighborhood of Jerusalem on Wednesday evening.

The terrorist entered the station and tried to stab the policemen who were inside. One policeman was lightly wounded in the head as a result of the stabbings and a Border Police officer was hit by shrapnel as the terrorist was shot in an attempt to neutralize him. Two other policemen were wounded.

Other policemen at the scene were able to neutralize the terrorist.

Magen David Adom paramedics who arrived at the scene treated the four wounded policemen and evacuated them to Shaare Tzedek Hospital in the city.

MDA paramedic Elad Fass said, “When we arrived at the scene, we saw three men fully conscious inside the building, suffering only minor injuries. We gave them initial medical treatment and evacuated them to the hospital. They were fully conscious and in stable condition.”