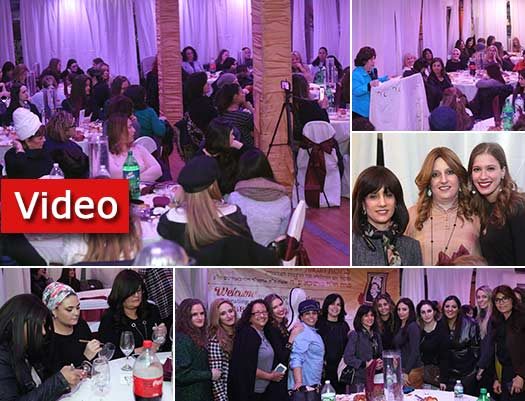 The first speaker of the evening was esteemed Rebbitzin Esther Sternberg who relayed her incredible stories of Rebbitzin Chaya Mushka from her first hand experiences with her. The women sat mesmerized soaking in every word of Mrs. Sternberg’s unique encounters as she enlightened them about Rebbitzin Chaya Mushka with her wealth of knowledge on the subject. She ended off by saying “If anyone here was ever touched by the Rebbe, you should know you really owe it to the Rebbitzin because she gave the Rebbe over to us. As her Yhartziet approaches we have to think about what we could do to thank this special woman. Let us improve in something, let us do something extra and through that give her Neshama an Aliya.”

Since the evening was all about the power of the Jewish Woman and her strength and capabilities, the next speaker was the Honorable Judge Rachel Freier of the Criminal Court of Brooklyn; the first ever Hasidic Woman in US history to hold Public office. Judge Freier recounted her journey; she described the different conflicts and struggles she encountered on her way up. Her message was clear and she beautifully conveyed it to the woman; “Whatever your standards are, hold them and keep them because they are precious. Don’t think for one second that you have to let go to be successful in the secular world because that’s not true.”; and she went on to prove that point with her unbelievable stories.” I realized that as I was getting higher in my professional path I was also becoming stronger in my Emunah.” She went on to relate, “There was so much Hashgacha Pratis that was in front of me every day, I felt Hashem was so close to me, I couldn’t deny it.” There was pin drop silence in the room as the women listened and held on to every word Judge Freier had to say.

The question answer panel following showed the women’s deep interest and showed they internalized the powerful life lessons that were given over. Every woman in that room left that night with a new perspective on how a Jewish woman can and should conduct herself. It was truly an evening to remember and kept everyone looking forward to next year.

The evening was dedicated in memory of Salin Melloul OB”M, a dear friend of the community who was taken from us too soon. She will be sorely missed.