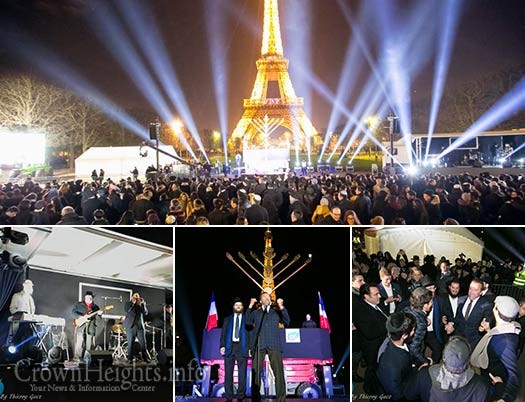 Just weeks after terrorists murdered 130 people on the streets of Paris, an estimated 6,000 people gathered tonight at the Eiffel Tower to watch the lighting of a 30-foot-tall menorah on the first night of Chanukah. The annual public menorah-lighting at the base of the iconic Eiffel Tower—a decades-old French tradition—is organized annually by Chabad-Lubavitch.

The eight-day holiday began after sundown on Sunday, Dec. 6.

Before the event started, individuals milled about in the 50-degree weather—fairly mild for a European evening in December. Parents held young children, while others clapped along to the live music, waiting patiently as the crowd grew larger and the speakers became more animated. “Quelle joie extraordinaire!”—“What extraordinary joy!” rang out in the night air.

“Chanukah celebrates the freedom of expression, both individually and collectively. It demonstrates the superiority of light over darkness, of right over might, of hope over fear,” was the refrain heard over and over again. “Each mitzvah is a light.”

In addition to moving introductory speeches by officials, children recited the 12 pesukim(Torah verses) with verve. Clips were also shown from Israel of the simultaneous outdoor menorah-lighting in Jerusalem, as well as the celebration and lighting in Netanya.

The first candle on the giant menorah was lit by Chief Rabbi of France Haim Korsia. In French, he said: “For more than 2,200 years, the Jewish people have kindled the lights with hope in mankind and an affirmation of their belief in God.”

After the lighting, he added: “You see beyond the Chanukah lights, the first light that ushers in the possible. Earlier, my friend reminded me that I am the spiritual advisor for a ground army, whose motto is: ‘Anything beyond the possible.’ ”

His words were followed by by a rousing rendition of “Maoz Tzur.”

In addition to the sizable crowd of local residents and guests, the event was attended by leaders of the French Jewish community, members of the Paris city council and representatives of the French government.

A guest appearance was also made by well-known actor and former California Gov. Arnold Schwarzenegger, who insisted that “good prevails over evil” and wished everyone a “Happy Chanukah!” He then proceded to dance with the crowd.

A contributing factor to the large Chanukah attendance is that this is a traditional year of Hakhel, a time dedicated to promoting Jewish unity through Torah study, and public gatherings and celebrations.

The Eiffel Tower event is one of more than 30 different public menorah-lighting celebrations taking place across the city and in nearly 100 nearby towns. It is part of a worldwide Chanukah campaign set into motion in 1973 by theLubavitcher Rebbe—Rabbi Menachem M. Schneerson, of righteous memory. Since that time, the public display of the holiday has become a staple of Jewish cultural and religious life.

Chabad-Lubavitch will set up more than 15,000 large public menorahs in more than 80 countries around the world in the next eight days, including in front of landmarks such as the White House in Washington, D.C., the Brandenburg Gate in Berlin and the Kremlin in Russia.

“This year, Chanukah delivers a particularly relevant message,” said Rabbi Chaim Schneur Nisenbaum of the Complexe Scolaire Beth Haya Moushka school system in Paris. “In Paris, we very recently faced terrible attacks … intended to put an end to the freedom of mind and opinion. In the historical times of Chanukah, the invaders of the land of Israel, the Greeks, had the same intention. But the Jews did not submit.

“They knew that light is stronger than obscurity, and that nobody can douse it.”