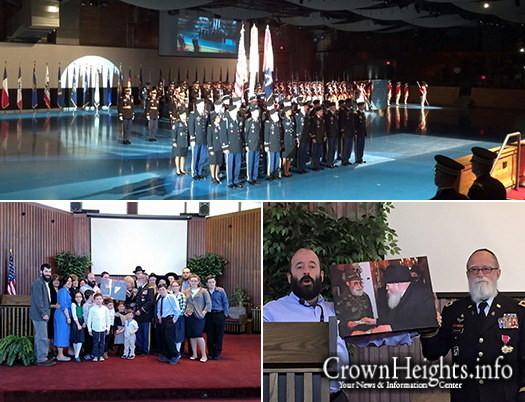 After 38 years of dedicated service in the U.S. Army, Chaplain Colonel Jacob Z. Goldstein has retired. In a ceremony in the Joint Base Myer-Henderson Hall at Fort Myer, Virginia, 35 army personal retired, with Col. Goldstein leading the group with his 38 years of service.

Attending the event were members of Goldstein’s family, along with a number of area Shluchim.

During the event Col. Goldstein spoke and gave thanks to his family for putting up with his 38 years of service. “At least I won’t be cutting anymore family vacations short because I was called up,” he said.

Col. Goldstein attributed his success in the army to the Lubavitcher Rebbe – who gave his blessing when asked if he should join the army as a chaplain, saying “Nachon Hadavar” [it is correct] – and to his family, for putting up with his often times chaotic schedule.

Later, at a second event in the Chaplain Hall, his son Dr. Asher Goldstein presented him with an enlarged photograph of the chaplain receiving a dollar from the Rebbe after returning from the Gulf War.

During the ceremonies, Col. Goldstein was presented with a number of certificates and awards from President Barak Obama, the Chief of Chaplains and the Office of the Army.