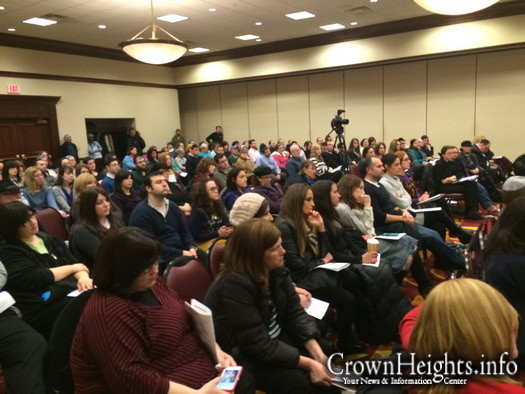 200 members of Cleveland’s orthodox Jewish community gathered on Sunday night to hear from abuse survivors, mental health professionals, and legal experts, in a “Night of Awareness and Education” about CSA. The event was organized by Jewish Community Watch (JCW), an organization committed to raising awareness of and preventing CSA in the orthodox Jewish community. The standing-room only crowd included survivors, parents of small children, and community leaders.

Ruth Gordon spoke about her son Dave Gordon who he had been a victim of horrific abuse as a child growing up in Michigan. As a young adolescent he suffered through depression and addiction but eventually turned a corner and became an outspoken anti-abuse activist. He joined the Israeli Defense Force and partook in the Operation Protective Edge in Gaza this past summer. Shortly after, he was tragically found dead of gunshot wounds.

Ruth spoke about the specific struggles that victims of abuse face within the orthodox Jewish community, where the institutional cover-ups and shame have destroyed numerous lives. She noted the irony that her late son Dave had received more unconditional support in his Narcotics Anonymous groups, which were mostly held in churches, than he received at his local synagogue. With her voice shaking she concluded with a message for the parents in attendance “watch your children, listen to your children, believe your children, protect your children and love your children”

Eli Nash, a survivor of CSA and an anti-abuse activist, urged parents not to “sacrifice your children on the altar of keeping up an image and reputation.” While Meyer Seewald, founder and CEO of JCW had a message for survivors “You are not alone! You must know that you have a place to turn to!”

Dr. Norman Goldwasser, a trauma psychologist, spoke about the impact he’s seen firsthand from JCW events on survivors. Ronnie Ducoff, an Assistant Prosecuting Attorney in Cleveland, explained the process of bringing charges against a perpetrator and by urging victims to go to the police.

Rivka Joseph, a member of the Cleveland community and the local coordinator of the event, revealed publicly for the first time that she is a survivor of CSA, declaring that she is no longer ashamed and no longer feels judged. “Jewish Community watch is a survivor’s best friend” declared Joseph.

Mendy (Robert) Klein, a businessman, philanthropist and community leader, stood up at the conclusion of the event and declared that the Cleveland Jewish community maintains a zero-tolerance policy towards CSA and that this is the policy adopted by the community Rabbis.

After the event, Seewald said, “Thank G-d, I really feel the tides shifting. This is the third event JCW has held in the last 6 months and in each case the turnout and support from the community has been overwhelming. The age where abuse in our community is covered up is coming to an end. JCW has another event planned next week in Miami, and we plan on traveling to every city with a major Jewish population in order to bring our message of prevention, healing, and education.”