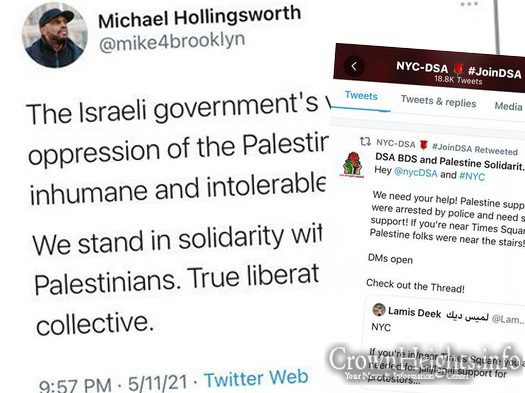 by Yaacov Behrman and Shlomie Klein

Socialist representation of Crown Heights? A BDS supporter as your City Council member? Jewish concerns shelved? Yep. And all you have to do is ignore the coming June 22 election.

As Jewish communities around the world rallied for the security of Israel, anti-Semites wasted no time in demonizing Israel with accusations that defy logic and decency. In the US, few have been as vocal in their hatred of Israel as the Democratic Socialists of America (DSA).

The DSA is a radical-left political organization that is pretty okay with Jew-hatred. They chant “from the river to the sea, Palestine will be free” in our streets–an open call to eliminate Israel–as Hamas bombards Israeli civilian targets.

The DSA was quick to rally their members to provide legal support for the violent pro-Palestinian mob that gang assaulted a Jewish man in Times Square. They stand shoulder to shoulder with BDS and require their candidates to pledge to never travel to Israel.

Michael Hollingsworth is the BDS DSA-backed candidate for City Council and is in lock step with their anti-Jewish stance. He’s appalled by Israel’s “violent oppression of the Palestinian people,” which has says is “inhumane and intolerable.” Rocket attacks on Israeli civilians and racist mob violence in our streets by pro-Palestinian “protestors” are just fine with him, apparently.

His campaign for City Council reflects his commitment to DSA values. He is the only city council candidate ever to seek to represent Crown Heights while declining to even communicate with the Jewish community.

The bad news can get much worse: we’ll see many more candidates like Michael Hollingsworth on ballots for years to come–unless we send a message that affiliation with radical-leftists like DSA means electoral war with the Jews.

His candidacy and the danger it represents has united Crown Heights community activists in support of his opponent, Crystal Hudson.

Crystal Hudson is a former staffer for outgoing Council member, Laurie Cumbo. Crystal is not affiliated with the DSA or BDS movement and, most importantly, has an active dialogue with our community institutions.

Internal polls show that no other candidates have a chance at victory. This race is between Crystal and Michael only.

Elections will take place on June 22, when many of our residents will be away in the country. Because of the ranked-choice voting system (in which voters can cast their vote for more than one candidate) there is a real chance that Crown Heights, the Rebbe’s schunah, will have city representation that is disctincly socialist and anti-Semitic.

What can we do?

2. On June 22 (or through early voting June 12-20th) go out and vote. Crystal Hudson is the only candidate that has a chance to win against Michael Hollingsworth. Click here to find your early voting location. https://findmypollsite.vote.nyc/

The Democratic Socialists of America already succeeded in putting anti-Israel Phara Souffrant Forrest into the state Assembly. They want a foothold in the City Council through Michael Hollingsworth, with their headquarters in Crown Heights.

The stakes for Crown Heights and the Jewish community couldn’t be higher. Anti semitism (endorsed by leftists so long as it’s “anti-Israel”) is spiking across the US. The impact of this election will be felt in our schools, our homes–and our streets.

Now go out and vote.