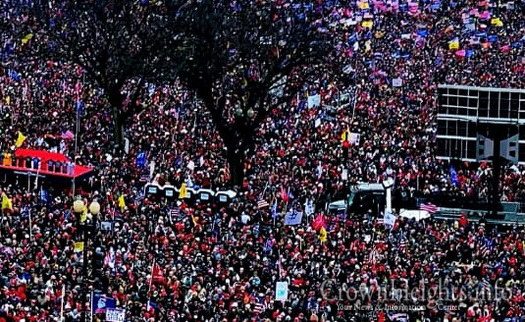 I got to the designated area well before the scheduled time of 7:00am. The website had said to come early. It was colder than I had expected. I dressed for the reported 40 degrees, but not for the intermittent chilling winds.

This was not the first time I had rallied with Trump supporters. I have been to Trump rallies, Pence rallies, and to an event hosted by Women for Trump. A major part of the reason I like to attend is the good energy. It’s invigorating. The cold temperature on the 6th had a sobering effect on the people, but the good energy was still there.

With the exception of a few eccentrics, whom I consider add interest to the gatherings, I find Trump supporters to be wholesome people. They have what I consider to be American values. They respect families, they respect law, they like to have friends and have a good time. And if a good time is not provided for them, they know how to make a good time happen. We were outdoors standing around for hours, and people were cheerful and hopeful. They embodied positive attitudes.

I met two groups of people from Idaho, people from Texas, South Carolina, Maine, North Dakota, and Ohio. Those are the states I can remember.

There were so many flags! People really appreciate Trump and like to express that appreciation when they get the chance. And not just flags. They wear all sorts of Trump products. But the flags are the most visible.

The subway station I used that morning was close to my hotel, and there were a number of us setting out together. No one really knew where we were going, but when we got to our desired station, we stepped off the train and just followed the flags.

As dawn was breaking, we watched as streams of flag carrying Americans could be seen coming from all directions, merging into one large avenue that had been blocked off to accommodate them.

I came early and I left early. So I wasn’t there when the Capitol building was stormed.

The rally involved so many people, hundreds of thousands, bordering on half a million… had they been angry and aggressive, the results of the attack would have been even more catastrophic than what actually happened. But the crowd was not angry. I find that amazing. People were concerned. They traveled and stood in the cold to show support for their President. But they were orderly, responsible, respectful individuals. That is why I am glad I was there. To me a Trump supporter is not what the media is portraying them as. They would never dream of doing what will be remembered on January 6th, 2021.

Once the speeches started, from where I was standing, there was a hush so we could hear over the speakers. Behind me, a man shouted out, “We should storm the Capitol. We outnumber them. They can’t stop us.” That was about 10:00am. It was hours before the actual storming.

Hearing this incitement, I looked around, curious to see the reaction to such a call to arms. The reaction was a strong non-reaction. No one took the bait. I wondered if the man was a ‘plant’. Someone looking for recruits, so storming could be staged, making it look like Trump supporters were storming the Capitol. From the lack of reaction, I was sure it wouldn’t happen.

When I first heard the call to action by the man behind me, I couldn’t help but think he was right. The idea was right. But carrying it out would be wrong. I believe there is tremendous corruption in the Capitol. To get to DC I had driven across Pennsylvania. I never cease to marvel at well cared for farmland. Huge fields that require tremendous work, and they all look cultivated and ready for each season as it comes. I was driving past these fields the day or so after the Congress had made some declaration about not using words like mother and father. And then the person saying the opening prayer says amen and a woman. I wondered if Congress even knew that farmers in Pennsylvania existed. I never asked the farmers, but I doubt they care about the words being ceremoniously used or not used. They use cow dung to fertilize their fields, not for virtual signaling. My point being, the Congress is not serving the people well. Our institutions of education, entertainment and media are tainted with destructive leftist ideas. And now there was a stolen election, as known to anyone who took the time to avail themselves of what Mayor Giuliani and his team had uncovered. So the question becomes, why not storm the Capitol?

To be successful, the storming would have to be done with a plan. If the only plan is destruction, then the results are self destructive. The January 6th inciters knew that. The people who got swept up at the moment couldn’t see past the moment. The result was chaos and confusion, which would be followed by a smear campaign against President Trump and the hundreds of thousands of American patriots with American values who would never dream of storming a government building.

At previous rallies in DC, Antifa was visible. At this rally, there was no visible Antifa. They could easily have been embedded in the crowds, appearing to be Trump supporters.

It reminds me of the evacuation of Gush Katif, when pro-Disengagement thugs mingled with the settlers. It also reminds me of 1994 when the world turned on “settlers” because of the interpretation of what happened with Boruch Goldstein in Hevron. The one who controls the media wins the alleged reality.

I don’t know how I would have perceived January 6th, 2021, had I not been part of that massive crowd and felt its goodness, calm and optimism.

I am writing this from my hotel room. The downstairs lounge is closed because of the Covid response. I am under curfew until 6:00am. We have no chance to gather with others and casually share our thoughts.

I have no idea what the next few weeks will bring. Now is one of those times when Emunah is especially comforting.

I do expect that fresh, powerful, good, conservative leaders will emerge. I’m impressed with some of a new group of women elected to Congress under the label of Republican. I am hopeful a few of them will raise their voices together and create a favorable impact. I saw James O’Keefe of Project Vertias operating near the rally. He posted a short video after the storming. His words were encouraging and based on action, not just empty words. The time is right for people who might otherwise not become public figures to rise to the occasion.

What happened on January 6th, 2021 is confusing. I personally appreciate what Trump has done and that he has done his job with a pleasant demeanor. I fear what a leftist government can do. But I know Hashem has a plan. And it is not chaos. I trust that Moshiach is the true globalist leader who will bring goodness to the world. Please Hashem. This time we mean it. We really want Moshiach NOW!