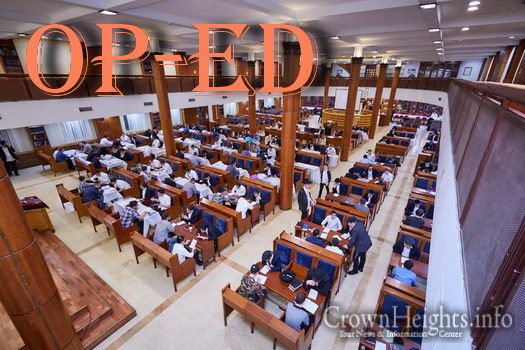 Last night, Thursday, the eve of 19 Shevat, in honor of the upcoming Yahrtzeit of Rebbetzin Chaya Mushka נ״ע זי״ע over a thousand members of Anash and Bochrim, men and women, gathered in Bais Rabeinu 770 for a masterful shiur in a Maamar of the Rebbe, taught by renowned Mashpia Rabbi Yosef Yitzchak Paltiel. Everyone present as well as thousands who were watching the live stream at BeisRabeinu.com/22Shvat were uplifted and inspired by the beauty of coming together to learn the Rebbe’s Torah in the Rebbe’s own Shul and Beis Medrash.

Sadly, that which had been a truly perfect evening until then, ended in disgrace at the very last minute as the video screens suddenly went dark and the live feed was interrupted.

The Gabbai Zalman Lipsker had instructed Yitzi Vail to cut off the electricity in that section of 770.

And why? To prevent a video of the Rebbe from being shown. The pain is too great.

How does a child disrespect his father so wantonly in his father’s own house? To pull the plug on the Rebbe in 770 in front of a thousand people and thousands more online?

And all because of what? What is Zalman Lipsker’s official excuse for disgracing the Rebbe? He says that it is “official policy of 770” not to play videos from JEM.

A sensible person might have trouble even believing this to be the actual “reasoning” except for the fact that it was verified in writing by Eli Cohen of the CHJCC who wrote that “the Gabboim” think that JEM “censors the Sichos not to have anything strong about Moshiach.”

This entire situation and the supposed motives is so perplexing and baffling. But here are the facts that the Crown Heights community, Anash around the world, and all who care for the Rebbe and 770 should know:

Zalman Lipsker claims to be opposed to the ongoing antics of a few emotionally unstable individuals whose terror disrupts our holy house on a daily basis. He claims to be opposed to the ongoing mockery of the Rebbe that is “Sunday Dollars,” “Yechidus Klolis,” and more. He claims that he would stop it if he could, but that he needs backing of the Rabonim. He has repeated these claims over and over.

A person, Chazal tell us, will not lie about a matter that is public knowledge. So what is his explanation for not taking a stand against the craziness that he himself supposedly opposes when the unified Beis Din already wrote and signed a letter over six weeks ago empowering him to do so?

The task that the Rabonim have explicitly empowered him to carry out, he claims he cannot do. (And truthfully, that alone could be forgiven, as not everyone is strong enough to be responsible to hold a position of public authority.) But as last night’s debacle proves, he is very capable of taking a stand and acting swiftly when he chooses to, as evidenced by how quickly he cut the power after a video of the Rebbe began playing in 770 last night.And what’s more he decided to do so on his own, without any support of the Rabonim and against thousands of Anash who would want to see a video of the Rebbe.

What emerges from all this is that the claim that the Gabboim lack sufficient power or
backing to enforce policy in 770 is a patent, bald faced lie. They can clearly enforce anything they wish to as quickly as they wish to, when they desire.

As such, we are forced to conclude that the Gabboim fully support the craziness, they fully support the terror, they fully support actions which disrespect the Rebbe and drive the majority of Chasidim away from 770 R”L! It is irrelevant what their twisted logic or bizarre motives might be. The point is that they can no longer conveniently blame others to cover for themselves. They do as they please, when they please, without support or backing from anyone. But they cannot do the one thing that the Rabonim have empowered them to do and that Anash are begging of them?

The community is crying out. The Rabbonim too have made their stance clear. Put an end to the daily mockery of our holy Rebbe now. Excuses will no longer suffice. Action must be taken and it must be taken now. And if not, new elections must be held to install competent leaders who will represent the will of the community and restore honor to the Rebbe’s house.