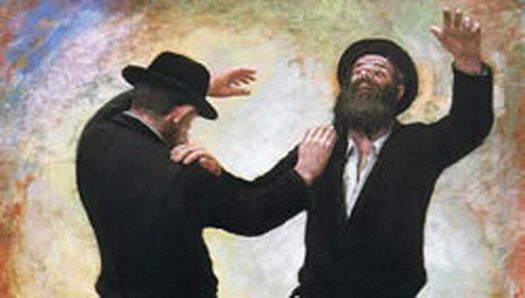 Rabbi Shimon Posner writes the following Op-Ed regarding his late father Rabbi Zalman Posner obm, and how he took the Rebbe’s Simchas Torah with him on Shlichus.

As a young man, my father had privileged Simchas Torahs — he danced with the Rebbe: for more than one year, if I’m not mistaken. “Like this!” he’d show me, his arm stretched in front as if resting on someone’s shoulder. The way Chassidim often dance, two in a circle, with maybe a few more resting their hands on the arms of the first two. It was in the late forties, and the Rebbe with the other two or so would dance through the night until dawn. One would take a break from the circle, catnap head on table and join back in, my father explained. “But not him! He never stopped. Not once!” There was one nigun they sang all the night through; I was too young to know that I should write it down these details.

From after my father was sent to Nashville, he never spent Simchas Torah with the Rebbe again. Not once. Arrangements had been made more than once, tickets and all, but in the end he stayed at his post.

I grew up with my father’s Simchas torah. As I remember it, Shul was more crowded than Ne’ila. Gone was the erudite articulate scholar who consistently hit the esoteric concept on its comprehensible head. On ST he was gregarious, downing a full glass of Lchaim and boisterously kidding around with everyone there. “They’re gonna flip yo’ Daddy,” those in shul would drawl to me. The first time I didn’t know what they meant and it was disturbing to five-year-old me to see my father tossed in the air. He would teach the men how to do it: Chasidim had done it to his father-in-law in 770 for decades.

He would dance till sweat poured off his body: the patrician Southern gentlemen shyly joining in the fun. A contemporary of mine has lived in Brooklyn for over three decades and is still looking for a shul that can do for her what my father’s hakofos did. Afterwards he would sit all us kids down, and tell us that we have to dance for the Jews in Russia and learn Torah for them and keep Shabbos for them and be a little more careful with kosher for them. “Because if it’s not important to us, why should they be risking their lives?” Looking back, it feels like it was mirroring the Rebbe’s end-of ST Farbrengen.

It took me years to realize that this yeshiva bochur who danced with the Rebbe never came back to 770 for Simchas Torah to witness the indescribable. Instead, he took it with him.