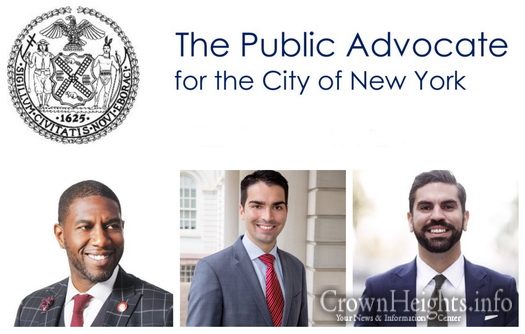 Did you know that there’s an election in New York City today? if you didn’t know don’t worry, most New Yorkers don’t know about it, and the few that do, many of them don’t care about it.

We are having a special election for a position called NYC public advocate, since the current P.A. Letitia James (a resident of Crown Heights,) won higher office. The public advocate is one of three citywide positions that we have elections for here in NYC. It is supposed to act as a guard against the mayor and be an independent voice for the people of NYC. Since NYC is a democrat controlled town most of the time the position is less effective than it can and should be, in fact many have called to shut the office down calling it a waste of money etc.

I encourage everyone to go out and vote tomorrow, even though some of you may be tired of voting and question why you should take the time to vote for a position that we will need to vote for again later this year.

The answer is our community is almost 100% shut out of Government. Right now we suffered big losses in the recent democratic primaries, and suffered more losses in the general election. Now isn’t the time to get into how and why the happened, but today we have a strong chance to make a stand and help turn the election in favor of a candidate who is a true friend of our community with proven results.

Erich Ulrich, is the only Republican candidate running in today’s election, and he’s a long time friend of the entire Jewish community. He has very strong relationships and history with the Frum community. I am not talking about someone who woke up yesterday and ran to take a few photos with some machers. I’m talking about someone who was already advocating for our special needs community as far back as 2009 when he was  rookie city council member.

The public advocate doesn’t have a lot of powers, but it has a strong bully pulpit and some powers as well as a budget that make it an office worth investing in, and having a good person run it.

The way this special election was set up its a rare opportunity for a republican to win, since there’s approximately 15 democrats are also running, and presumably splitting their vote. According to most experts Eric Ulrich is one of the top candidates with a shot at winning, and the only candidate with a bigger chance than him of winning is Jumaane Williams.

To his credit, Jumaane is a hard working politician and almost stunned the political world by his tight run for Lt Governor. I personally like his style, but sadly he isn’t an option for our vote, as he’s completely aligned himself with the extreme anti Israel /anti frum lifestyle progressive mobsters. I believe he’s done that to atone for certain pro religious values votes that he took earlier in his elected life.

Just last week, I got into a bizarre twitter discussion with him where he confirmed that he’s completely oblivious as to why the Jewish world is upset with Congresswomen Ilhan Omar. He simply couldn’t understand why we didn’t accept her generous apology. Candidate Rafael Espinal also has some frum support but the reasons given for supporting him all apply doubly to Eric Ulrich.

In this election you can vote regardless of which party you are registered in, this is a great opportunity to help elected a true friend of our community to a citywide position, and to make a statement that the Frum community isn’t political dead.

Yosef Hershkop is a resident of Crown Heights Brooklyn. He is a healthcare executive and he’s been an organizer of many pro Israel rallies and is involved in several Jewish organizations. He can be reached at yosef.hershkop@gmail.com or follow him on twitter at @yossy770.

This Op-Ed does is the view of its author, and does not reflect the view of CrownHeights.info.