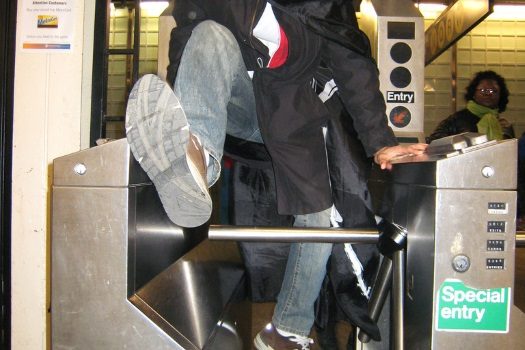 At a press conference held yesterday in Crown Heights, State Sen. Jesse Hamilton and Assemblywoman Tremaine Wright unveiled a bill they will introduce in Albany that will decriminalize turnstile-jumping, making arrests for the offense a thing of the past. Violators will instead be hit with a $100 fine.

Two Brooklyn legislators are hoping to make turnstile-jumping arrests a thing of the past.

The pair plans to introduce legislation in Albany that would punish turnstile jumpers with an existing fine — $100 per offense, Wright said — instead of with a Class A misdemeanor, which can lead to up to a year in prison.

“We are decriminalizing it. We are not making it something that is without penalty. We are now saying they would be subject to the existing fines that are on the books,” Wright said, standing with Hamilton and a group of public defenders advocating for the new law in front of the Franklin Avenue subway station in Crown Heights.

“We want people to pay their fares. We just want it to be handled in a humane manner,” she added.

The legislators and advocates say the current penalties for fare beating disproportionately affect young people and non-white New Yorkers. According to state data cited by Hamilton, 92 percent of the more than 29,000 people arrested in 2015 for misdemeanor fare beating, or  “theft of service,” were people of color.

And last year, approximately 18,000 of the people arrested for fare evasion last year were 16- and 17-year-olds, Hamilton said.

“Imagine having a lifelong record for not paying $2.75,” he said.

The lawmakers’ proposal comes a month after Manhattan District Attorney Cy Vance Jr., said he’ll no longer prosecute fare beating in the borough, though Vance said that offenders will have to choose to enter a diversion plan to avoid prosecution.

Wright sees it as an “equity and parity” issue.

“If you go through a toll system on the interstate [without paying], you are not arrested. You are given a fine,” she said.

The legislators plan to introduce the bill, S.4841-B, in their respective houses when the new legislative session begins in January, they said.