« Smolensk Gets Ready for Pesach
Rabbis in Rio Gear Up for 40,000 Jewish Visitors to Olympics » 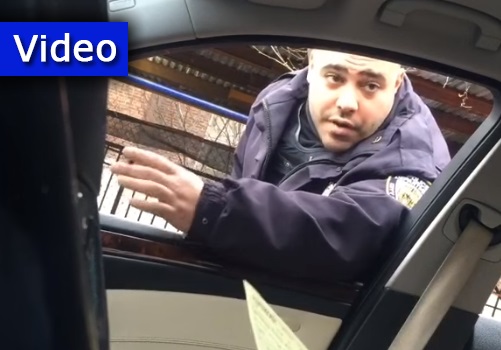 An NYPD officer who was caught on video blaming Mayor de Blasio for an increase in traffic summonses won’t be issuing any tickets for the foreseeable future. He has been suspended from duty until after his conduct is investigated, according to a police source.

As reported previously on VIN News, an unidentified officer is seen in a dashboard video telling a Bronx motorist he pulled over that, “Mayor de Blasio wants us to give out summonses, OK? Alright? I don’t know if you voted for him or not.” The officer reveals he does not reside in the five boroughs and thus is not responsible for the Mayor’s policies. “I wouldn’t have voted for him because this is what he wants; he wants us to give out summonses.”

The officer did not know his traffic stop was being recorded when he pulled over an unnamed driver for playing his radio too loudly.

The video has since been taken down.

The man did not want his identity revealed and was too afraid to be interviewed on camera, but told PIX 11 News () he was stopped Saturday night by the officer.

He said he had installed the camera because “he got tired of the cops pulling him over.”

Reaction to the incident was mixed in the Bronx. One woman told PIX11, “I think cop watch is a very useful tool especially in communities of color where the NYPD is over-policing. It’s a means to monitor our public servants.” Another woman added, “I honestly believe if you’re playing music in a car you shouldn’t be pulled over, but that’s my opinion.”

As part of his Vision Zero program, the Mayor has cracked down on drivers and demanded more enforcement. Yet, according to NYPD data, summonses for motor vehicle violations have actually declined compared with the same time in 2012 during Mayor Bloomberg’s administration.

In a statement about the incident, Mayor de Blasio said, “Vision Zero is saving lives. Traffic fatalities are down 22 percent since Vision Zero started, making 2015 the safest year on city streets since recordkeeping began.”

A police official said that the officer is from Rockland County.

« Smolensk Gets Ready for Pesach
Rabbis in Rio Gear Up for 40,000 Jewish Visitors to Olympics »