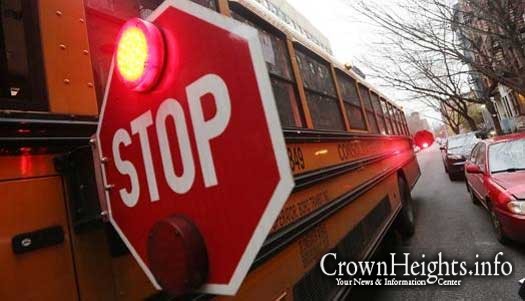 Thousands of city kids were left stranded this morning when school-bus drivers and matrons went on strike, leaving parents scrambling to find other ways to get their children to school.

On Fox-5 TV this morning, the mayor said the city won’t back down.

“There’s no extra money so we couldn’t change our mind and cave if we wanted to,” Bloomberg said. “There’s only a certain amount of money. I’m not going to move money away from police and worry about safety in the streets to pay bus drivers.”

The mayor also said he would not ask the courts to intervene right now.

“I don’t think it’s time yet to do that. No. 1, it’s not clear that all of the unions are striking. We’ll find out later this morning. It’s not clear this union won’t come to its senses and say I just don’t want to hurt the kids — and this is not something that’s going to help them. They’re going to lose out on their pay from now until June,” said the mayor.

The devastating job action, called Monday by the union representing most of the city’s yellow bus drivers and matrons, left as many as 152,000 children — including 54,000 special-needs kids — faced with travel nightmares or even getting stuck at home for the duration of the work stoppage.

City officials took to the airwaves yesterday to blast Local 1181 of the Amalgamated Transit Union for leaving the students — many of whom have already suffered through Hurricane Sandy and missed a week of school — in the lurch.

“The union drivers are striking against our children, plain and simple,” Walcott said yesterday.

The city distributed free MetroCards to tens of thousands of students yesterday to help them with the expected transportation chaos. Free monthly cards also will be handed out to parents of kids in second grade and younger today.

But MTA officials acknowledged that the cards might not work at all subway stations until later today, nor on all public bus routes until late tomorrow.

The last time city school-bus drivers went on strike was 34 years ago. It lasted three months.

Today’s strike was sparked over a job-protection clause that the city removed from newly bid-out contracts.

Local 1181 claims that up to 2,500 of its members’ jobs will be at stake if new bus companies are awarded contracts in June without the protective clause.

“We’ve tried every option to avoid a strike, but our members feel that their back is to the wall and they must take a stand on this issue,” said Local 1181 chief Michael Cordiello.

Workers were heard chanting this morning “What do we want? Contracts. When do we want them? Now.”

The city disputes the group’s job numbers and insists it wasn’t allowed to maintain the protections because they were deemed illegal by the state’s highest court in 2011.

Education officials also said they’re trying to trim costs from their $1.1 billion yellow-busing budget, the highest in the nation.

While at least six small bus companies said they were planning to operate as usual this morning, it wasn’t clear whether union protesters might try to block them.

Asked yesterday whether his union would allow other workers to cross picket lines or enter non-union bus depots, Cordiello would only say, “Our members have been instructed to do nothing that’s illegal.”

His union represents nearly 9,000 drivers, matrons and mechanics — including nearly all the bus matrons who are required to supervise special-ed students.

That appeared to mean that even companies with non-Local 1181 drivers would be prevented from running their special-education routes.

Local 584 of the Teamsters union — which represents roughly 1,000 drivers, matrons and mechanics — said it wouldn’t join the strike because its contract with bus companies doesn’t allow for it.

But its president, Dan Gatto, also said his members wouldn’t cross picket lines.Parents can get updated information on which bus routes are running by clicking the Department of Education link on the city’s nyc.gov Web site or at www.opt-osfns.org/opt/Resources/SchoolRouteStSearch/searchresult.aspx.