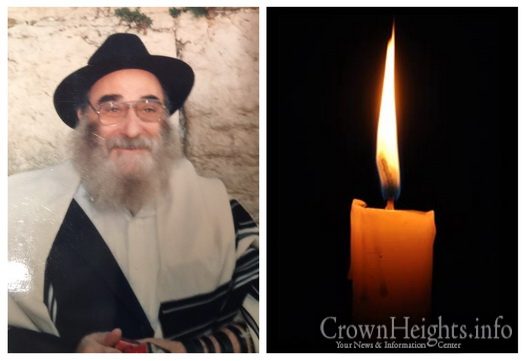 With great sadness we report the passing of Rabbi Yehuda Leib Mockin OBM, a long time member of anash in Crown Heights. He passed away on shabbos, the 9th of Av 5779.

Yehuda Leib was the son of Reb Peretz Mochkin, the famed chossid from the village of Nevel in Russia who later served as the Mashpia of the Chabad community in Montreal, Canada.

R’ Leibel, as he was known, was one of the fearless group of leaders who smuggled families of Chassidim out of the Soviet Union after the Second World War. Using forged Polish passports, the group was able to lead most of the Chabad chassidim out of Russia, including the Rebbe’s mother, Rebbetzin Chana.

He was very involved in being mechazek the community of Crown Heights, including helping with the purchase of buildings on Kingston Avenue.

He is survived by his siblings Berel Mochkin (Montreal, Canada), and Mrs. Gutte Shapiro.

Levaya will take place today, Sunday, 2:30pm at Shomrei Hadas Chapel in Boro Park, and will be passing by 770 at 3:30pm.