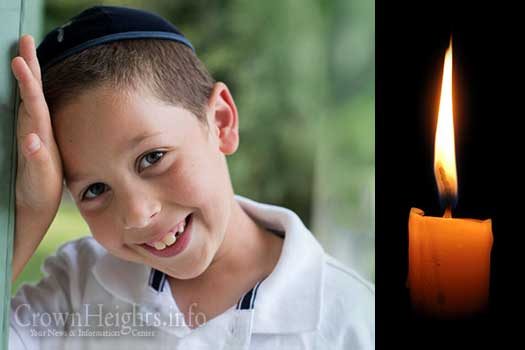 With great sadness and immense pain we inform you of the very untimely passing of Chaim Schneur Zalman OBM ben Betzalel YBD”L HaKohen Borenstein, a young Shliach from Whitby, Ontario Canada who united tens of thousands in doing good deeds in the merit of his recovery. He was 9 years old.

A studious and bright young boy, Zalman had fallen ill just a year ago and was diagnosed with the dreaded illness.

Learning and mitzvah campaigns were launched in his merit alongside Challah bakes, which united tens of thousands in doing good deeds.

Zalman also competed in this past years Chidon Hamitzvos and was among the finalists.

More recently a new Sefer Torah was written in the merit of his recovery.

After a brave and valiant battle Zalman passed away early this morning.

He is survived by his parents Rabbi Tzali and Chana Mala Borenstein, Shluchim in Whitby, Ontario Canada, as well as his four siblings Perel, Chaya, Yossi and Bina.

He is also survived by his grandparents R’ Moshe Nachman and Dina Borenstein of Crown Heights and Mrs. Sima Faiga Leiberman of Ft. Laurderdale.