« ‘Stop Having a Child Every Year,’ the Doctor Said
Chabad Rabbi Pulls Endorsement from ‘Tahor’ App » 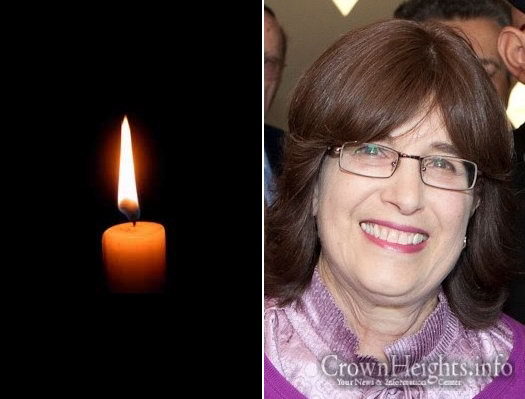 With sadness we inform you of the sudden and untimely passing of Mrs. Adrienne Katz, OBM, one of the founding members of the Chabad community of Palos Verdes, CA. She was 75 years old.

She passed away on Wednesday, 14 Iyar, 5777, Pesach Sheini. Her untimely passing came as a great shock to the members of the South Bay and Palos Verdes community.

In 1973 Adrienne and her husband, Norman Katz, OBM, were one of the founding members of Chabad of South Bay, California, and In 1987 they helped establish Chabad of Palos Verdes, where they lived.

Known as a kind and caring woman, she and her husband supported many Chabad Houses and yeshivas. For the last two years of her life she lived in Israel to be close to her daughter and grandchildren.

She is survived by her children: Mordy Katz (Los Angeles, CA) and Jolene Sonnenberg (Bet Shemesh, Israel), and many grandchildren and great-grandchildren.

the Levaya and Shiva will take place in Israel on Thursday.

A Special Shloshim memorial will take place in Palos Verdes – time and place to be announced.

Memories and condolences can be sent to mordy@kksllp.com.

« ‘Stop Having a Child Every Year,’ the Doctor Said
Chabad Rabbi Pulls Endorsement from ‘Tahor’ App »