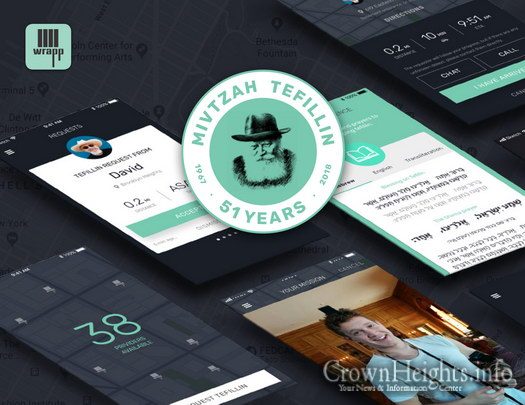 After 50 years of incredible success, the Tefillin campaign the Rebbe launched prior to the Six Day War is about to spread like wildfire. WRAPP, a brand new mobile app that merges cutting-edge technology with good old-fashioned Ahavas Yisroel, puts a powerful tool in the pocket of every Lubavitcher to fulfill the Rebbe’s vision of enabling every Jewish male over age 13 to wrap Tefillin.

The concept is simple. WRAPP matches people wishing to wrap tefillin with those in their area who have tefillin, just as Uber matches drivers and riders. Anyone with tefillin and a smartphone can join in this worldwide tefillin wrap by simply signing up to WRAPP as a provider, and anyone who wishes to wrap tefillin can enroll as a requestor. Whether you are in your workplace, at the airport waiting for your flight, or on a family outing, putting tefillin on another Yid is now just a click away.

Friday afternoon mivtzoyim routes have long been an important venue for Lubavitcher bochrim to wrap tefillin with Jewish storekeepers, businessmen and doctors, many of whom eagerly await the weekly visit. Now, thanks to WRAPP, these Jews can “hail” tefillin any day of the week, anytime and anywhere. Whenever they have a free moment, they can simply click on WRAPP, discover someone in their area with tefillin, and arrange to meet.

Why Wait for Friday?

WRAPP sprang out of a Friday encounter on a street corner in B’nai Brak. Shimon, an Israeli Chabad chosid, ran into an old friend and stopped to chat. But his friend was in a big rush to put on tefillin with someone. “He looks forward all week to putting on tefillin!” the friend explained.

Shimon stopped in his tracks. He said to his wife, “Wait – if a Jew wants to put tefillin on Sunday, he cannot? On Monday, he cannot? He has to wait for Friday afternoon mivtzoim? This makes no sense!”

A lightbulb went off in Shimon’s head. What if the person seeking tefillin could simply click on his phone and find the nearest person with a pair of tefillin willing to help him do the mitzvah? In fact, who said that pair of tefillin must belong to a Chabad chosid, when plenty of other Jews in the area also own tefillin, and would be happy to help another Jew do the mitzvah?

And so WRAPP was conceived.

While wrapping tefillin with others is universally perceived as a “Chabad” activity, the Rebbe’s vision was much broader. A non-Chabad chosid once remarked to the Rebbe that upon seeing a man wrapping tefillin with another Jew, he could immediately identify him as Chabad. The Rebbe responded that he hoped all frum Jews would engage in this activity, not just Lubavitchers.

WRAPP facilitates the Rebbe’s vision, enabling tefillin-owning Jews of every affiliation the chance to comfortably share this mitzvah with their fellow Jews. WRAPP technology unites Jews of every background and level of observance, breaking down barriers and fostering ahavas Yisroel.

After months of planning, design, and development by coders and designers, WRAPP is now ready to launch in the U.S. and Israel, with additional English-speaking countries coming shortly. After an initial 10,000 providers sign up, WRAPP will be widely promoted to the general public.

“Now that I’m in the workplace, I’ve missed my days as a bochur when I would go on mivtzoyim,” said Sholom Moscovitz of Crown Heights. “WRAPP will let me continue to help people fulfill the mitzvah, and I can’t wait to get started.”

“This is your chance to really change the world and fulfill the Rebbe’s vision,” said Shimon, the WRAPP innovator.

Join today! Learn more and download the app at www.tefillinwrapp.com And it’s a WRAPP!