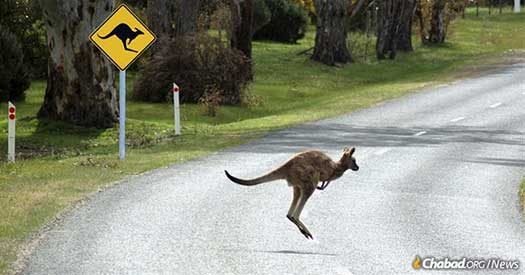 Kangaroos can be a dangerous presence along Australia's highways, as one rabinnical student discovered.

A Kangaroo Crash and a Rare Rabbi-Sighting in the Outback

Cootamundra, population 6,700. I had been driving for six hours on behalf of Chabad of Rural and Regional Australia, or RARA, northbound along the seemingly endless Hume Highway, stretching the vast distance of Australia’s east coast. I was headed to Wollongong, just one of eleven locations where regional Seders would be taking place, a coastal paradise famed for its beautiful beaches and warm climate. But now I was taking an hour detour off the Hume Highway to visit the only Jewish family living in Cootamundra. The sun was setting as I neared Cootumundra, simply known as “Cootie,” painting the horizon a beautiful orange and pink medley of color, and sweeping across the drought ridden plains, peeking through the bare trees.

It was nightfall by the time I reached Sarah’s house, hidden away by the bend in the road. Sarah was anticipating my visit, it was the first rabbinical visit since the holiday of Chanukah, and she’d kept her young daughter awake just for this occasion.

Sarah, a native of Canada, had met her future husband while studying at University in Sydney and had also fallen in love with Australia’s remote countryside, the outback. Living more than 100 miles from the nearest Chabad House in Canberra, Chabad of RARA was her only source of Jewish warmth and guidance.

We sat down and spoke about the challenges of being the only Jewish family in such a remote area, and instilling Jewish pride in her young daughter, who comes to preschool with matzah instead of the seasonal chocolate bunnies like all her peers.

I told over the story of Passover in dramatic detail to Rivka, a riveted 5-year-old. “Pharaoh should have let the Jews go!” Rivka exclaimed. “He wasn’t acting very nicely.”

Before I continued on my way, I gave them a large box of handmade shmurah matzah (an auspicious time to do so, being the night of the birthday of the Lubavitcher Rebbe, at whose behest tens of thousands of pounds of shmurah matzah are distributed worldwide) with which to make the only Seder between Wagga Wagga and Canberra, in the dusty plains of Cootie.

Like a true Yiddishe Mamma, Sarah made me promise to text her that I’d arrived safely at my motel for the night. I didn’t anticipate any issues, and I gave her my word.

It was now getting late, and I had to get to my lodgings before 10 p.m. I was staying the night in the historic town of Yass, three hours south of my destination, Sydney Airport, where I had to pick up my chavrusah, (Roving Rabbi partner), my brother Levi.

Driving down the dark windy country roads, an animal jumped out onto the road ahead of me. I slowed down and narrowly missed a kangaroo. It was a close call.

Back on the main highway, and only 25 minutes from Yass, I was startled as a large kangaroo appeared just feet in front of me. I was traveling at nearly 70 mph, and there was no time to react. I slammed the brakes, braced for impact and ran straight over it. The car was still running, and I wasn’t too far from my destination, so I kept driving. Several minutes later, the engine overheating light lit up, and with that, the car stalled in the middle of the highway. I pulled over to what passed as a shoulder and called the NRMA, the local roadside assistance.

The tow truck arrived after a long, cold wait. “The roo’s knocked out the radiator,” said the guy dryly after inspecting the engine.

The car needed a tow, and I needed new lodgings for the night. But at close to midnight and in the middle of nowhere, I couldn’t find anything open. We drove towards the tiny hamlet of Jugiong, where the car was going to be dropped. Then, like a gift from heaven, a motel appeared. We pulled up, and it was open. The proprietors, fascinated by a rabbi visiting their tiny town (population 222), spoke with me about religion and what I was doing well into the night, and even allowed me to store my frozen meat in their freezer.

The next morning, a kind guest at the motel, who was also heading up north, graciously offered me a ride to Yass, where I was picking up a rental car to continue on my way. The fellow strapped all my many possessions, including a precious Torah scroll, onto the back of his pickup truck, or in Australian parlance, his “Ute.”

Hours later, with all my gear in a new car, I picked up my brother, and we headed for Wollongong.

Preparations for the Pesach Seder were now in full swing. We had to cook for 30 people in a tiny kitchen; there was no time to waste.

Shortly after arriving, we received a call from David. He’d just arrived from France to further his education at the University of Wollongong and wanted to know where he could obtain matzah in Wollongong. We called him over, donned tefillin with him and invited him to our Seder, leaving him with a box of shmurah matzah.

In midst of the hectic preparations, we received a message from a woman in the community, about a woman who lived close to an hour away, whom rabbinical students had met two years before, who informed her that she can’t make it to the Seder this year due to the distance, but instead she’ll attend celebrations at a local church. We resolved to convince her to attend our Seder. After a lengthy conversation, she agreed to come to the Seder. We were elated.

The Seder was beautiful. All the men laid tefillin before sunset, one of them, a retired professor and an advisor to the National Government of Papua New Guinea, donned tefillin for the first time since his bar mitzvah. He later enthralled us with stories of the Seder in Papua New Guinea, organized by some 20 Israeli businessmen in Port Moresby.

On the second day of Passover, Sunday morning, we had a Shacharit minyan planned, a historic event for the Wollongong Jewish community, after their synagogue had closed its doors some 40 odd years ago. We held the service, complete with a Torah reading, at the home of Dr. Yoke and Bill Berry, leaders of the small local community. During the Torah reading, I made the blessing of Hagomel, customarily recited after being saved from great danger, thanking G‑d for delivering me from the clutches of the kangaroos and sparing me from what could’ve been a fatal accident. This was the first Yom Tov minyan since the closing of the shul, and the first Torah reading in almost a decade.

A Kiddush followed the service, during which we discussed the Jewish future in Wollongong, and all present committed to increase efforts to strengthen Yiddishkeit in the greater Illawara region.

All this was made possible by Chabad of RARA’s dedicated directors, Rabbi Yossi and Malki Rodal and Saul and Beverly Spigler, who facilitated Passover Seders throughout Australia, in conjunction with Passover Australia, from Fremantle in the West, to Darwin up in the far north, and everywhere between.