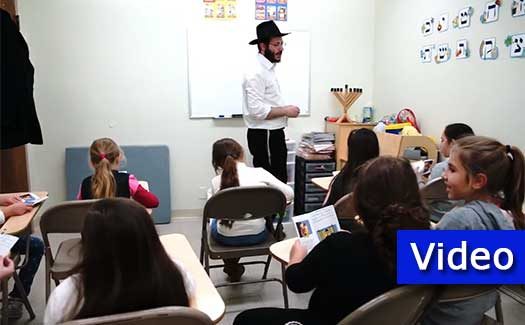 In the offices of the NCFJE, surrounded by shelves of neatly packed briefcases, sits Rabbi Shazak Zirkind in his classic hat and frock. With a smile that melts your heart he says that he would do everything in his power to help even one Jewish child. And he means it.

Rabbi Zirkind is the director of the Released Time Wednesday hour, and dedicates himself to make sure every Jewish child receives a Jewish education, even if that child lives in an obscure neighborhood without a Synogague or Jewish community.

Each Wednesday close to 200 young men and women travel to all five boroughs of New York City and beyond to bring one hour of Judaism to over 1,000 boys and girls in Public Schools. The success of the program can be clearly seen with close to 100 children transferring to yeshivos every year.

“Some of them have become teachers who themselves teach Torah to Jewish children. Some have even become rabbis,” Rabbi JJ Hecht, OBM, who headed the Released Time program from 1945 until his passing in 1990, would say. Fantastically, one child educated in the Released Time Program would actually become an instructor himself.

Marine Park was not always a popular Jewish neighborhood. Yet Zirkind chose to send a car to P.S. 222 with only one child registered in Released Time. Every week a bochur would travel to study with eight year-old Shlomo Goldman. “It was great,” Goldman humorously recalls, surrounded by seforim in the warehouse where he runs his online seforim store, “I was the only one and always won the prizes.” On a more serious note, he says that those bochurim who would schlep each week changed his life.

“I owe my entire yiddishkeit to Released Time,” he says.

His face swells with pride as he tells that when he was a bochur in 770 he too got the chance to become a Released Time instructor. His message is that we need to learn from President Trump how everyone could say that you will never be successful, “but I am proof that one should never give up trying, because at the end you never know what will be the result.”

The Released Time program is more than just one hour each week. The bochurim keep up with the families with other programs, including affixing Mezuzahs on their homes, purchasing Tefillin when the children turn Bar Mitzvah, and bringing them Matzah and Chanukah Menorahs around the holidays.

These programs have tremendous effect on the children, as the Rebbe wrote that Released Time, “has proved of immense value to the thousands of Jewish boys and girls benefiting from it in the Greater New York area and elsewhere.”

The briefcases are chock full of everything an instructor may need, including prizes, prayer books, a teacher’s guide, refreshments and arts n’ crafts. “We have to brainstorm what will bring the children back the next week,” Rabbi Zirkind says. “For every generation it is their interests. We are always reinventing ourselves.”

When asked how much it costs to run, Rabbi Zirkind gives us a peek at the bills for the transportation, which reached $102,000 last year, “and that’s just the tip of the iceberg” he says with his patented smile. Annual expenses are over $600,000, and as the programs are tuition-free, it is fully funded by generous donors. And with the enrollment of children growing, every year the numbers grow. “It is not about the funds,” Zirkind  says, “I will mortgage my home if I have to, to be able to educate even one more child.”

The Rebbe spoke highly of the program over the years, and on Yud Shvat 1966 wrote, “I hope that on the Yahrtzeit of my father-in-law, the Rebbe, you are doing all that you can to establish more branches of Released Time in your area. This is a project in which the one whose Yahrtzeit is today placed much effort, and encouraged every individual to become involved in it… It is of great merit to all those who act on behalf of the program.”

Take part in the Released Time programs by joining their second-annual Yud Shvat fundraiser at www.charidy.com/rt