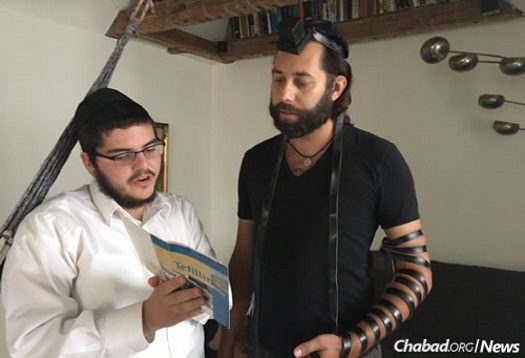 Caspar, right, celebrates his bar mitzvah after putting on tefillin for the first time, at age 47, with rabbinical student Levi Loewenthal.

Bochurim Mendel Danow and Levi Loewenthal describe an amazing encounter they experienced while traveling through rural Denmark to find isolated Jews and light their spark as part of the ‘Merkos Shlichus’ program.

From Chabad.org by Mendel Danow and Levi Loewenthal:

It was Wednesday afternoon, and we had just finished meeting with several Jews in the city of Aarhus.

Previously, we had been driving around Denmark, visiting communities without any Jewish presence whatsoever. We helped people strengthen their personal connections with Judaism by putting on tefillin with them, hanging mezuzahs on their doors and speaking with them about Yiddishkeit.

At that point, we felt we had met the Jews within reach and had completed what we had set out to do. We contemplated whether or not to return to Copenhagen, the capital city, and assist the Chabad emissaries there.

As we were driving along the streets, unsure how to continue, we looked over our list of Jewish names and noticed that there was one person we still hadn’t contacted—someone who lived two hours from where we were. We weren’t sure if we should call him since he was so far away. However, every Jew counts, and we dialed the number.

His name was Chanan, and he lived in Aalborg. “We’re from Chabad,” we told him. “Would you like us to come over, and we can discuss Judaism for a bit?”

“Chabad?” he asked with a pause. Then he said, “Please, come over.” He sounded excited.

So we drove up north and arrived at Chanan’s house as he was in middle of eating supper. He felt bad that he couldn’t offer us anything to eat, aside from fruit. We assured him that it was OK and sat down.

As we were talking, he started to open up to us, saying, “I was married to a non-Jewish woman, and we had two girls. Recently, I divorced her.” He sighed heavily, pained. “Unfortunately, she has custody of the girls. I’m not allowed to have any contact with my own daughters.

“This morning,” he said, “I was at work and feeling particularly low and upset by my state. So I spoke to G‑d. I told Him how hard this is for me, how lonely I feel, and I asked Him to please show me His presence, to show me that He is here, that He cares.”

He stopped and looked at us. “And then I see an unknown number calling,” he told us in wonder. “Someone called Mendel is on the phone. He is calling from Chabad, and he wants to come over and say hello. There was no clearer sign for me. This was G‑d’s way of reaching out to me, of telling me He is here with me in this struggle.”

We spoke with him at length, comforting him. We encouraged him to be more joyous, to focus on the positive, to try and see all the good and beauty that G‑d has given him in his life. Then we offered to put tefillin on him.

“I haven’t put on tefillin in years,” he said.

He became very emotional as we helped put them on; he started crying.

Afterwards, we explained the purpose of our visit to Denmark, and how hundreds of Chabad students visit thousands of Jews in all parts of the world. How this effort was initiated by the Rebbe—Rabbi Menachem M. Schneerson, of righteous memory—many years earlier and continues ever so strongly today. We spoke about the Rebbe’s care and love for every Jew, no matter where he may be or his affiliation to Judaism. We also encouraged him to write a letter to the Rebbe, and send it to the Ohel to get the Rebbe’s blessing and help in his troubles. Gladly, he took the email address from us to send his letter.

We stayed for a while longer, discussing belief and trust in G‑d, as well how G‑d watches over everyone, connecting it to the mitzvah of mezuzah. He then said he wanted to put up a mezuzah on his door.

Before we left, he told us that he had a Jewish Danish friend called Casper, a philosopher, and he had a feeling that he would be very interested in meeting us. Chanan called him to invite him over, but he couldn’t make it. Instead, we made plans to meet the next day.

When we arrived at Casper’s apartment in the city center, he started off by telling us a bit about his background. He informed us that his grandfather had been very involved in the Jewish community in Copenhagen; he had even started the Jewish school there. Casper himself had no affiliation with Judaism, although he was very interested in Kabbalah and the likes since he was a philosopher.

We spoke to him about different topics in Judaism, and he was very attentive. One of the topics that came up, of course, was tefillin, which he had never heard about before. When he heard what it signifies, the power it holds and what a special mitzvah it is, he was more than happy to put them on.

So we put tefillin on Casper for the first time in his life.

“Casper, this is your bar mitzvah!” we exclaimed.

He was so overjoyed that he started dancing with us right there in the middle of his apartment. We made a heartfelt l’chaim for his bar mitzvah at the age of 47 on a regular Thursday morning.

We spoke to him about the importance of a mezuzah, and he immediately wanted to put one up on his door. So we did. He very much enjoyed our visit, and after we left sent us a warm email expressing his thanks, as well as an inquiry as to where he could purchase a pair of tefillin. We are right now in the middle of buying him a pair in New York and sending them over to Denmark.

From there, we continued on the Rebbe’s shlichus throughout Denmark, touched by the inner spark that lies within the depths of every Jew and the special connections we formed with our fellow Jews in such forsaken places.