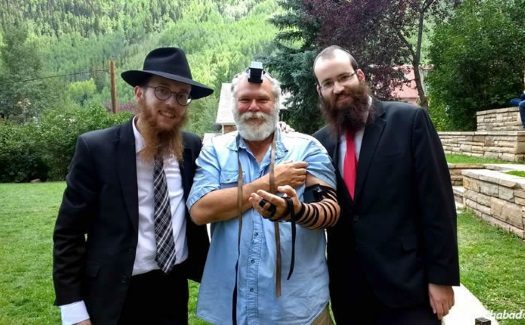 Bar Mitzvah at Age 70 on Top of the Rockies

From Chabad.org by Christopher (Bienbrech) Bonebrake:

Let me tell you a little story. It was a cloudless day on Monday in Telluride, Colo., a small Western town high in the Rocky Mountains filled with forests and rivers. This is my eighth year visiting my son Matthew in Telluride, and I have made many friends there over the years. I was on my way into town to run a few errands—mail some postcards home, have lunch with a friend and do some shopping at the market.

Telluride is full of tourists this time of year. As I passed the busy town park, I saw two young men in the crowd. Their appearance was very distinctive, and I immediately recognized them as Jewish men. Neatly groomed with beards, they were wearing handsome black suits and broad-brimmed hats. Without hesitation, I called out the window: “Shalom, my brothers, shalom!”

I came to a stop in the street as one of them quickly approached my car.

Without hesitation, we clasped hands. The first words from his mouth were: “Are you Jewish?”

He asked: “Is your grandmother Jewish?”

I said: “Yes.” And he said emphatically: “Then you are Jewish.”

At that moment, I knew I had to talk to these young men, sent by Chabad of Southern Colorado to perform mitzvahswith Jews in the area. I made a hasty U-turn in the street and quickly parked my car. They were standing on the curb watching me as I walked across the street. We shook hands, and I was introduced to Mendel and Mendy. I wanted to know more about them, so I suggested that we walk into the park a bit and sit down for a talk.

‘Recalling the Words My Zayda Used’

I told them the story of my Jewish grandparents and how they had crossed Europe in the early 1900s to escape the pogroms of Belarus and Lithuania. They settled in the East End of London, and made a life for themselves and their four daughters in the Jewish community. Their homes were bombed and destroyed during the Nazi blitz of 1940, but they survived. My father was an American sailor stationed in London. He met my mother and her family, and after the war, he sponsored their journey and settlement in America.

Then Mendy asked me the most poignant question: “Did you celebrate your bar mitzvah?”

No, I had not had a bar mitzvah ceremony when I was younger. My father’s family were American Methodists, and everyone seemed to get along nicely without much talk of religion. And what would a 10- or 12-year-old boy know about such things? But talking with these rabbinical students, a host of memories came flooding back to me.

“You can be bar mitzvahed here, now, today in the park,” they said.

I couldn’t believe it! I had never been asked or offered the opportunity. My beautiful mother had expressed regrets to me on several occasions at not having raised my brother, sister and me in the tradition of her Jewish ancestors. But that was many years ago; she’s 90 and I’m 70—two lifetimes nearly gone with so much that has happened over the years.

Again they offered, and I couldn’t say no. I noticed a striking black bag with Hebrew letters etched in gold. It was quickly opened. A yarmulke appeared and was placed on my head as the scroll boxes, or tefillin, were put into place. Before I knew it, I was reciting prayers in Hebrew and recalling the words my zayda had used at Passover. The world seemed to melt away for a moment as I gained confidence in reciting the words. Soon we were holding hands, singing and dancing in the town park, taking no notice of the people walking by.

I remember Mendy teaching me about a Divine spark and my relationship to G‑d. Then, as quickly as it happened, I was hugging Mendel and Mendy, and saying “shalom” over and over again. I thought: Am I crazy? Is this really happening? I quickly got my mother on the phone and introduced her to Mendy, who explained that now she had a son who was a proper Jew—well almost, without the years of study and practice. We soon parted, and I promised to stay in touch and come to see them in New York after returning to my home near Washington, D.C.

And there I was. Standing in the bright light of day having just had a bar mitzvah at 9,000 feet with two Jewish men I had met minutes earlier. I called my dearest Uncle Saul in Florida and told him that I just become a bar mitzvah in the town park. With his usual sense of wit, he said the next knock on my door would be the mohel.