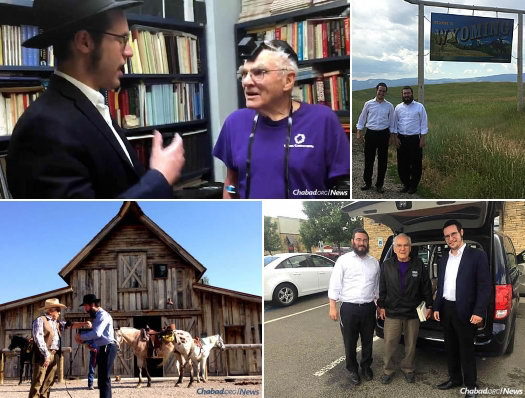 97-Year-Old in Wyoming Wraps Tefillin for the First Time

Edmond Gerald Meyer turned 13 in 1933 in Albuquerque, N.M., where his mother’s German-Jewish family had settled during the Civil War and founded a successful business that spanned the territory (as it was then known).

Although the family occasionally attended synagogue services, “E.G.,” as he was called, never went to Hebrew school and cannot remember celebrating his bar mitzvah. That is, until this week, when he met Rabbis Yisroel and Mendel Shemtov in Laramie, Wyo., where he still maintains an office.

The cousins (24, and 23, respectively) are traversing the state this summer as part of the Merkos Shlichus (“Roving Rabbi”) program, visiting Jewish people in villages and towns scattered throughout the least populous state in the country, which has an estimated 544,270 residents spread out over more than 97,000 square miles. Fewer than 2,000 Wyoming residents are believed to be Jewish.

Three weeks into their month-long stint, they have driven some 2,500 miles and have quite a way to go. After a week of meetings, door-knocking and making connections, the duo settles down for Shabbat, inviting their newfound friends to join them for services and kosher meals. This summer, they have spent Shabbat in Cheyenne, Laramie, Sheridan and Casper.

Many of the people they encounter have not had contact with a rabbi or organized Jewish life in years. Others had been visited before in the decades since the Lubavitcher Rebbe—Rabbi Menachem M. Schneerson, of righteous memory—established the program. Many of them are now in regular contact with Rabbi Zalman and Raizy Mendelsohn, who established Chabad in Jackson Hole in 2007, after the rabbi visited the state numerous times as part of the program before he married.

The first “Roving Rabbis” in the state were Yitzchok Block and the late Rabbi Binyomin Klein, who also visited Jews in Idaho, Montana, Texas and Utah back in 1956.

Meyer came to Laramie in 1963 to take up the position of dean of the University ofWyoming’s College of Arts and Sciences. Upon arrival, he discovered a small community that functioned without a synagogue and without a rabbi. Today, he estimates that about 200 Jews live in Laramie, of whom 14 families and 16 individuals affiliate with the official community, which meets for holidays in the local Masonic Temple.

Meyer, who has officially been retired from the university (where he went on to take a number of research, teaching and administrative positions) since 1990 and widowed in 2006, maintains an active lifestyle that belies his 97 years. In addition to coming to work every day at the university—where he serves on an honorary basis—he runs regularly and is training to qualify for the 2019 National Senior Games, which will be held, in all places, in his hometown of Albuquerque.

When the two young men showed up in his office, he greeted them warmly and regaled them with tales of his life, ranging from his childhood to the time he spent with the Navy during World War II, servicing destroyer escorts accompanying American merchant ships to England and Russia.

When the rabbis produced a pair of tefillin and explained how Jewish males wear them in prayer when they become a bar mitzvah (and every weekday thereafter), he was happy to put them on.

For their part, the young men say they were inspired by seeing how appreciative he was to perform the ritual so late in life. In fact, when they met with Wyoming Gov. Matt Mead, they told him about their meeting and how much it meant to be able to be part of Meyer’s life journey.

The governor was visibly impressed by their presentation, delaying his appearance at Cheyenne Frontier Days (the world’s largest outdoor rodeo and Western celebration) to hear about Meyer’s bar mitzvah and their other encounters.

“It was a fine experience,” Meyer tells Chabad.org. “You know, as one progresses in life—and I have progressed—you have different priorities and sensibilities. And at this point, reconnecting with Jewish life is an important thing to me.”