« Picture of the Day: ‘And This Is the Torah..’
Boruch Dayan Hoemes: R’ Yosef Elyovitch, OBM » 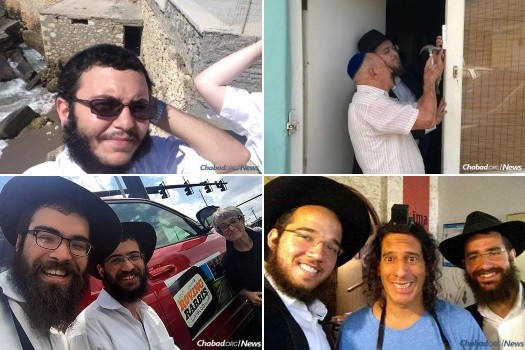 The summertime travels of “Roving Rabbis”—young Chabad-Lubavitch rabbinical students and newly minted rabbis who visit isolated Jews and small Jewish communities all over the globe—are filled with exciting, hectic days and nights in which they share the joys of Judaism with others. But on Tisha B’Av, they have a unique opportunity for a relatively quiet day of reflection, in which they can learn more about the local Jewish community and deepen their times with them.

The Ninth of Av, Tisha B’Av commemorates, among other things, the destruction of the Temples in Jerusalem and the subsequent dispersion of the Jewish people throughout the world. Observed this year after Shabbat on July 25 and ending the following night, the day of mourning includes a fast that lasts throughout the night and day.

“We plan on observing the fast together with the local congregation, which is currently without a rabbi,” says Rabbi Peretz Lazaroff, who is on the island of Curaçao in the Caribbean with Rabbi Yisroel Wolff. “We haven’t yet ironed out details like our meals before and after the fast, but we will certainly be in the synagogue with the very lovely people we’ve been meeting since our arrival, and we are doing our utmost to muster up a minyan so we can hold full services. If not, we will still be able to observe the central element of the evening: reading the book of Lamentations.”

For others, the day will be a welcome respite from weeks on the road.

After a grueling three-week tour of Greece—and soon to take up a second posting in Dubrovnik, Croatia—Rabbi Mendy Tubul took the chance to “recharge his spiritual batteries” in Israel. He plans to commemorate the saddest day on the Jewish calendar at the Western Wall in Jerusalem, literally steps away from the epicenter of the destruction nearly 2,000 years ago.

“This summer,” he says, “I have met Jewish people living in some of the oldest extant Diaspora communities—Greek Jews, whose ancestors have lived there back when the Second Temple was standing in Jerusalem—and now I am able to trace their steps in reverse.”

The symbolism also extends to his next destination, Dubrovnik, a charming port city that juts into the Adriatic Sea.

The community flourished in the 16th century, where it was a haven for Sephardic Jews fleeing the Spanish Inquisition. It was on the ninth of Av in 1492 that Spanish Jews were faced with the grim ultimatum of either converting to Catholicism or leaving the country they had lived in for hundreds of of years. Some of them moved to Dubrovnik, which was then known as Ragusa, where they turned a small Jewish community into a vibrant center of Spanish-Jewish culture for several hundred years.

Across the globe, Rabbi Nosson Huebner and Rabbi Yecheskel Posner will observe the 25-hour fast at the Chabad House in Lima, Peru, taking a break from their six-week tour of the country, where they comb cities and towns frequented by Israeli backpackers and other tourists. Since Chabad there runs a kosher bakery and restaurant, the duo welcomes the opportunity to enjoy complete meals both before and after the fast, perhaps the last full-fledged kosher meals they will have until their travels bring them back to the capital city next month.

Out in the American heartland, Rabbi Zushi Rivkin and Rabbi Mendy Wilschansky will take a break from their six-week cross-country tour to join the Chabad community in Kansas City.

But they plan on doing more than just praying and fasting. Earlier this week, in Shreveport, La., an elderly Jewish couple they’d met gave them the contact info of a friend in Kansas City, whom they felt would appreciate a visit from the pair of rabbis. “Assuming we feel up to it, in the afternoon, when the mourning restrictions ease up somewhat, we hope to visit them,” says Rivkin. “Even if we are fasting, we are still very much on our mission to meet as many Jews as possible, and encourage as manymitzvahs as we possibly can.”

Articles and videos about “Tisha B’Av, a Day of Mourning, a Day of Hope,” including its history, laws, customs and inspirational meaning, can be found here on Chabad.org.

« Picture of the Day: ‘And This Is the Torah..’
Boruch Dayan Hoemes: R’ Yosef Elyovitch, OBM »