« A Bachur’s Memories of Gimmel Tammuz
Photos: Videos of the Rebbe on Eastern Parkway » 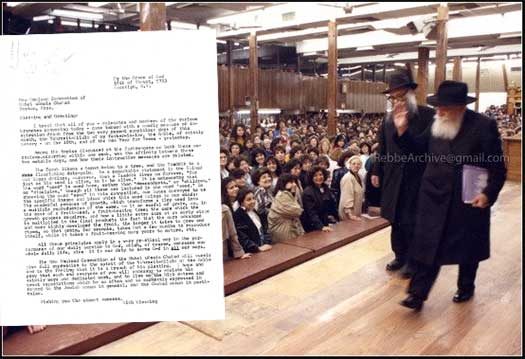 In preparation for Gimmel Tammuz, we are presenting a letter that the Rebbe wrote to the Neshei Chabad Convention in 5723 which took place around Tu B’Shvat, in which he connects the significant day of Tu B’Shvat and the Yom Hilulo, Yud Shvat  of the Frierdiker Rebbe. The theme being that a tzaddik lives on forever. The letter, written originally in English, is from the archives of the Rebbe’s trusted secretary Rabbi Nissan Mindel. The above letter is from The Letter and the Spirit by Nissan Mindel Publications (NMP).

These letters were written originally in English and were prepared for publication by Rabbi Dr. Nissan Mindel, whose responsibility it was the Rebbe’s correspondence in English and several other languages.

We thank Rabbi Shalom Ber Schapiro, who was entrusted by his father-in-law Rabbi Mindel with his archives and who is Director of the Nissan Mindel Publications (NMP), for making the Rebbe’s letters available to the wider public. May the merit of the many stand him in good stead.

« A Bachur’s Memories of Gimmel Tammuz
Photos: Videos of the Rebbe on Eastern Parkway »