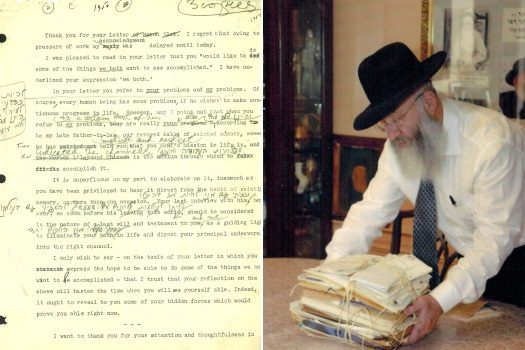 This week, in honor of Yud Shvat, Rabbi Sholom Ber Shapiro of Nissan Mindel Publications shares with our readers a copy of an original, unique letter from the Rebbe, with his handwritten notations, written right after the histalkus of the Previous Rebbe on Yud Shvat, 1950, to one of the Rayatz’s well-known supporters.

The letter continues with numerous shared goals as well as guidelines for the supporter.

In addition, Rabbi Shapiro presents our readers with handwritten notes of the Rebbe about 1. a trip to be taken, 2. Parnassa, and 3. the resting places of tzaddikim, and specifically the resting place of Frierdiker Rebbe, and their great accomplishments.

These rare documents are from the archives of Rabbi Nissan Mindel, with which his son-in-law Rabbi Shalom Ber Schapiro has been entrusted to preserve and promote, and which Rabbi Schapiro shares for the benefit of the public.