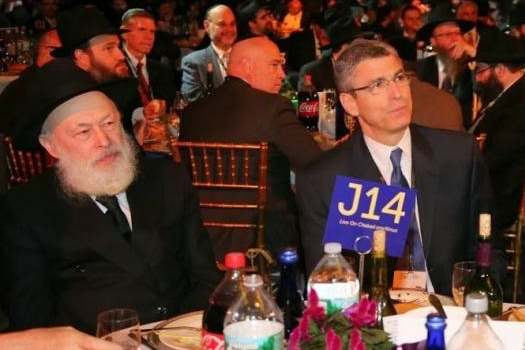 Among the thousands of Chabad emissaries and lay leaders attending this year’s Kinus Hashluchim grand banquet was someone whose presence raised the eyebrows of those who noticed him. Rabbi Rick Jacobs, leader of the Union for Reform Judaism, attended the banquet as a personal guest of Rabbi Yehuda Krinsky.

Ben Harris writes for the JTA:

Amid the dim lighting and sartorial conformity of Sunday night’s Chabad kinus, it’s normally pretty hard to find people. But after my table mate informed me that among the guests that night was the leader of the Union for Reform Judaism, it took only a quick glance across the room to locate the beardless Rabbi Rick Jacobs seated at a table near the stage.

It is almost certainly the first time that the leader of the Reform movement has attended a Chabad kinus. The event has been held for just 30 years, so only Jacobs’ two immediate predecessors — Rabbis Alexander Schindler and Eric Yoffie — could have attended. Yoffie never did. And the kinus was comparatively a tiny affair during Schindler’s tenure. (Schindler did, however, meet with the Lubavitcher Rebbe, according to Yoffie.)

When I approached Jacobs, who was standing alone by the stage as a sea of black-hatted men surged around him, he didn’t appear eager to probe the significance of his presence. He told me he had been invited by Rabbi Yehuda Krinsky, the head of Chabad’s educational arm, and had happily accepted. When I called the next day to inquire further, I was told Jacobs was in meetings all day.

“Rabbi Jacobs said that he was honored to be Rabbi Krinsky’s guest,” a URJ spokesperson emailed me. “He enjoyed the evening very much, and will leave further comment to his hosts.”

Chabad has been an object of both envy and criticism for Reform leaders.

In his installation sermon from 2012, Jacobs said that Reform Jews could “learn important lessons from Chabad about creating non-judgmental opportunities to experience Jewish practice and build sacred relationships.” He also vowed that his movement would no longer permit Chabad to operate on campus without competition.

Jacobs’ predecessor, Yoffie, also had some feelings on the subject of Chabad. In an article in Haaretz earlier this year, Yoffie noted Chabad’s obvious successes, not the least of which is the creation of a corps of devoted young rabbis unequaled in the Jewish world. But aside from their obvious parting of theological ways, Yoffie also took issue with Chabad’s rightward orientation on Israel, its strains of messianism, its cultivation of  wealthy individuals, and its promotion of what he called a “minimalist” Judaism with low expectations. (A Chabad official responded that there’s something a little rich about the head of a movement that has abrogated the commitment to many Jewish rituals to accuse an Orthodox group of lowering the religious bar.)

Mrs. Baila Olidort writes further on the subject at Lubavitch.com:

With a guest list spanning the broad diversity of Jews from every denomination and political affiliation, at least 30% of the 5200 invited to Sunday night’s banquet dinner of the Annual International Conference of Shluchim were supporters and admirers of Chabad.

“Tonight was a unique event in the Jewish world, filled with spirit, enthusiasm and optimism,” said Michael Steinhardt. The financier and philanthropist, founder of Birthright Israel spoke pessimistically of the Pew study findings. By contrast, he told a lubavitch.com reporter, “When I look around here, I find this group to be a moment of spring in an otherwise depressing environment.”

Year after year larger venues are sought to accommodate the growing guest list of the now-famous banquet dinner. Planned specifically for Chabad Shluchim and their partners, organizers reluctantly cap the much coveted invites to this rare, larger-than-life experience. The event, observed Rabbi Yehuda Krinsky, “gives us a glimpse of the vision of kibbutz galuyot [the ingathering of exiles]. Here you have people from every strata of Jewish life unified by an overriding force.”

Elazar Stern, a Knesset Member in Hatnuah, Israel’s political liberal party led by Tzipi Livni, noted the large number of guests who were not Shluchim. “I don’t know if the Shluchim recognize how much support they really have for the difficult work they do,” he said. Speaking on the record, he told lubavitch.com: “I believe that the State of Israel ought to formally recognize shlichut [the outreach activities of Chabad emissaries] as part of its national service, and I am working on this.”

In the face of current handwringing about Jewish identity and Jewish continuity, Chabad’s Shluchim offered a persuasive antidote, evidence of the staying power of yiddishkeit and the possibility of defying statistical odds when motivated by the vision and fierce passion for Jewish life that drives them in their day-to-day lives.

Dov Greenberg, Chabad representative at Stanford University who delivered the keynote address, shared the narrative of Chabad Shluchim and the results of their stubborn persistence even when there seem to be no takers. He told the story of Louis, a Jew who fled Russia in the early 1900s.

“On the ship on his way to America he threw his tefillin overboard” hoping to leave his Jewish baggage behind in his quest to assimilate. In 1970, Louis’s grandson Stanley, a student at the University of Maryland, was approached by the Rebbe’s emissary, Rabbi Sholom B. Gordon, inviting him to wrap tefillin.

“Stanley refuses. Rabbi Gordon knocks again. Stanley says ‘go away!’ The rabbi keeps knocking.” Eventually, Greenberg says, Stanley agreed, if only to be rid of the annoying rabbi. One thing led to another and Stanley began to study Torah. “He shares what he learns with Sherry, a Jewish girlfriend. They get married and raise a Jewish family.”

The kicker came when the Stanford rabbi revealed that “Stanley and Sherry are my parents, Louis, my great grandfather,” and that he is one of four siblings who are serving as “the  Rebbe’s ambassadors at Chabad centers at campuses around the world.”

Illustrating the dramatic impact of one rabbi back in 1970 who refused to give up on one individual, Greenberg observed that he and his siblings, each at their respective campus, “reached 392 students at our Shabbat campus dinners last week.”

But, he told his now fascinated audience, “What is exceptional about the story is that it is not exceptional. It is the story of Chabad in our time.”

The Power of One

If ever the Rebbe’s call that “no Jew be left behind” seemed an unrealistic fantasy, Chabad Shluchim are making a strong case for its plausibility. Last year, 86,000 Jewish students visited 200 Chabad campus centers around the world. There are about 4000 Chabad centers worldwide, and new ones open at a steady pace.

Rabbi Rick Jacobs, President of the Union for Reform Judaism shared a table with Rabbi Krinsky. “It’s inspiring to be with a group of Jewish leaders who feel so passionately about bringing the love of yiddishkeit and the life of commitment to the widest possible circle,” he told lubavitch.com. “It’s a privilege to be in this circle, and to talk with Rabbi Krinsky about what is really challenging the Jewish people.”

Nearly 20 years after his passing, the Rebbe, his inspiration palpably felt in the hall, continues to fire the imagination of his emissaries. He was on the mind of guest speaker Joseph Lieberman, former US senator (D) from Connecticut.

“This is probably the largest crowd I’ve had the honor to address since I accepted the Vice Presidential nomination in LA in 2000,” he said looking out at the 5,000-plus crowd that filled the South Brooklyn Marine Terminal.

Days before the banquet, the Terminal was revamped into an elegant space for one of the largest sit-down dinners anywhere. Crystal chandeliers hung from elegantly draped ceilings, and a rotating stage with 360 exposure and LED screens strategically positioned, gave guests sitting anywhere in the cavernous hall comfortable viewing of the speakers.

A Reason to Dance

Lieberman reminisced about his relationship with Chabad going back to his first forays into politics, and the direction and blessings he took from the Rebbe. “He was a leader with a mission who convinced people to bring the world as close as possible to perfection, by doing mitzvahs one at a time.” The former senator shared anecdotes about the Rebbe’s tefillin and Shabbos candle lighting campaigns during his many years in Washington, and the effect of these individual mitzvahs, ultimately on society at large.

“I believe that those candles that Chabad lit in the FSU are what helped bring about the collapse of the Soviet Union and brought about the end of communism,” said Lieberman, who began his career in the Senate during those tumultuous days.

Loathe to rest on their laurels, Chabad Shluchim take away new ideas to advance Jewish engagement. Rabbi Moshe Kotlarsky announced an initiative focusing on Jewish youth empowerment through innovative programming geared to this demographic. Funding for the new initiative, he said, would be provided by an anonymous donor.

At the urging of his rabbi, Isaac Winer, an attorney from Palo Alto, stood up on a table when the 5000 guests took to the floor, dancing for joy at the privilege of being part of the Chabad phenomenon.

Winer was moved by the warmth that surrounded him. “I have never felt Jewish unity so powerful, so real. To see so many different kinds of people united as they were here, in genuine warmth and joy for yiddishkeit was an unusual experience.”