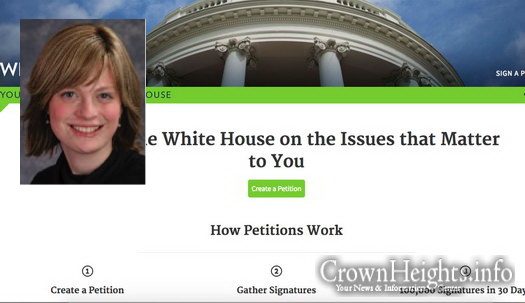 Rebecca Soffer Ph.D, a Jewish Developmental Psychologist, took on New York City’s Mayor Bill de Blasio in a viral message calling for the Jewish community to sign a petition to the US government:

We welcome the new year, finding ourselves in a once-in-a-century public health crisis. As an orthodox, Jewish woman, a parent, and a mental health professional, I deeply appreciate the ongoing work of public servants at all levels of government and healthcare keeping us safe. My concern is two-fold. How will living “remote” lives impact the future of our children and is the city of New York exercising overt antisemitism under the guise of “protecting” the community?

While mass “zoom” school is too new for conclusive outcome data, enough research on “screen time” suggests it should be avoided at all costs. We know for certain that increased screen time affects sleep, body weight, and attention. Younger children are found to have poorer language and social skills. Conversation and eye gaze are awkward and who sees body gestures and nuanced facial cues through a screen. More research found that children spending more time on screens also had fewer interests, played and explored less, which impacted creativity and thinking skills. It’s the “use it or lose it” phenomenon. Without necessary input and practice of essential life skills, the child’s flexible brain adapts to life without. There’s much, much more research, easily accessible on the American Psychological Association and American Academy of Pediatrics websites. Just to put this in perspective, these findings were from children spending between 2-3 hours a day on a screen. Zoom school requires our children to remain on average 5-7 hours facing a one-dimensional screen. When finished, which parent is then not letting their child “relax” for some more time watching their favorite shows?

New York City Mayor de Blasio clearly understands this and has been consistently resolute about ensuring “in-person” learning for public and charter school students. To quote some of his press statements:
“There are some out there that suggest that remote education should be our future and I say no it can’t be.”
“Of course it will open,” he says, “It’s never going to be perfect, but it will be what schools need.”
“Let’s talk about the obvious — some people will test positive, and those folks will immediately get support (suggesting quarantine for two weeks before they) will come back to work, and they will complete the entire school year.”
“I’ll tell you, there’s a hell of a lot of parents who want their kids in school, and we owe it to him to do that and to do it safely.”

That’s correct, Mr. de Blasio. There are over 100,000 Yeshiva students in New York City – together with their parents and teachers – ready, willing and able to immediately return to their classrooms. Yet, even with perfect adherence to CDC and New York City guidelines and positivity rates of less than 0.1%, the Department of Heath without any prior warning, without any reasonable justification or guidance for re-opening and without any attempt at fair and equal treatment of similarly situated non-Yeshiva schools simply shut our Far Rockaway Yeshiva down. Mr. Mayor: Where’s your commitment to our children?

I too have read the research suggesting that up to 40% of community spread can be attributed to schools. However, that data does not account for schools which have taken extreme measures to re-open safely. In fact, there is no data to suggest that any community spread has been attributed to attendance in the specific schools closed. Even more confusing is why mere blocks away public and charter schools serving our non-Jewish neighbors remain open for in-person learning. The absence of clear and uniform standards parallels last May when lawmakers called out NYC for reacting with bias to people not wearing masks. Police were distributing masks to people in packed city parks yet fining Chassidic Jews.

Another upsetting parallel is that I find myself defending my religious right to educate my children in a Yeshiva for the second time in as many years. As much as scientific evidence and Mayor de Blasio support in-person learning, for our community learning IN a Yeshiva takes on an entirely different dimension. A Yeshiva is so much greater than a “school.” Yeshivas have been for literally thousands of years and will always continue in perpetuity to be the focal point of our religious community. It’s not just the curriculum Yeshivas teach, which some might argue is feasible to deliver “remote”; Yeshivas instill in our children relationships with man and the Almighty, didactic interactions and time-tested traditions through which our children form their Jewish identity.

As proud Americans, it is our civic duty to call out governmental overreach, bias in discriminatory and irrational treatment. Mayor de Blasio cannot distract from the crime, economic decline, and disparity riddling our city by scapegoating a group, reticent to fight back. In words and actions he must be as committed to “in-person” Yeshiva learning as he has consistently and publicly declared to be for public, charter and other private schools.

As a Yeshiva community, it is our religious and parental duty to protect and ensure our children’s future both as Jews and US citizens with the right to practice religion freely. Arguments about masks, weddings, and eating out need a separate forum. Yes, we are in a pandemic and public safety is paramount. However, unilateral governmental overreach imposed on our community and beloved Yeshivas, especially when carried out in an inconsistent, arbitrary and sudden manner cannot be tolerated. Please join me in sending a message to the Department of Justice: https://petitions.whitehouse.gov/petition/religious-discrimination-new-york-city 100,000 signatures in the next 30 days will ensure our voices are heard.