« Writing a Pan Isn’t Just on Gimmel Tammuz
8:00pm: Can You Share Your Personal Experience of Gimmel Tammuz? » 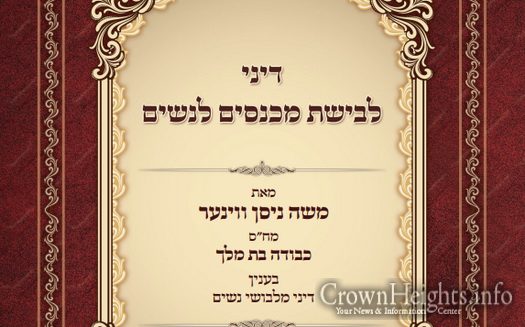 As the weather gets warmer and winter clothing gives way to summer gear (and especially during the week of Parshas Naso which is the source of many relevant halachos), it is an appropriate time to review the guidelines of proper Jewish dress.

A new publication does just that. Titled Women and Pants: A Halachic Perspective, this Hebrew booklet, by Rabbi Moshe Wiener, methodically addresses the halachic concerns involved in women wearing pants, and provides a comprehensive discussion of the related practical details.

Poskim are in universal agreement that it is absolutely prohibited for women to wear pants.

Here is a synopsis of the main halachic concerns of women wearing pants, as explained in the booklet:

-The Mishnah and Gemara describe activities prohibited for women due to Das Yehudis—actions that are antithetical to our religion. One such action, as established by Chazal in various sources, is that even when her body is properly covered, a woman may not dress in a manner which exhibits and emphasizes the shape of her body through the clothing. Poskim are in unanimous agreement that this prohibition includes pants, since they display and emphasize the division of the upper section of the legs. Halachah considers pants one of the most severe breaches of the laws of modesty. (Other tight or showy garments are similarly forbidden for this reason.)

-Included in the prohibition to not “follow the ways of the nations” is not to wear styles of clothing that accentuate a woman’s body or are provocative, as this type of attire is distinctive to gentile society.

-Additionally, wearing such garments arouses in men feelings of lust, and is thus forbidden due to lifnei iver, not to cause others to commit a transgression.

-According to most Poskim, pants, by their very nature, are considered men’s clothing, and the wearing of them by a woman is thus a violation of the verse in Devarim (22:5) not to wear clothing of the opposite gender. Although some have reasoned that this specific issur may not apply to pants specifically designed and styled for women, major Poskim categorically reject this logic, stating that pants are intrinsically a male garment, regardless of their design. Similarly, they explain, the fact that today many non-observant women wear pants does not in any way change their status as men’s clothing. (Even those Poskim who don’t categorize all women’s pants as a male garment nonetheless universally agree that the wearing of any pants by women is totally and unquestionably prohibited, due to the other halachic issues enumerated above. No less a preeminent halachic authority than the Chazon Ish went so far as to declare that he was convinced that if at the time of the Sanhedrin a woman would have appeared in public in pants, she would have been brought to Beis Din and executed for behaving with gross indecency.)

Additionally, the booklet addresses a number of halachic questions related to wearing pants, including:

-May one daven or learn when facing a woman wearing pants?

-Is wearing pants in public grounds for divorce?

-May a woman wear pants beneath a dress or skirt?

-May a woman wear pants for exercise, for sports, while engaged in manual labor, or in a hospital setting?

-From what age should young girls not wear pants?

-May women and girls wear pajamas with pants?

Also featured as an addendum is an English response to a common misrepresentation of the Igros Moshe’s position and the standards of yeshivish communities regarding the exposure of women’s hair.

To view the entire publication at no cost, please click here.

To sponsor its printing, or for copies to distribute at a simchah as a teshurah or to share with students or colleagues, please contact Rabbi Moshe Wiener at kvudabasmelech@gmail.com.

This publication is also available to be purchased (at cost price) through Amazon by clicking here.

Rabbi Moshe Wiener is the author of the sefer Kvuda Bas Melech, a comprehensive guide to the laws of modesty in women’s dress, regarding which the Lubavitcher Rebbe wrote: “Chaval [it is a regrettable loss] on each day which delays the reading and study of this sefer.”

« Writing a Pan Isn’t Just on Gimmel Tammuz
8:00pm: Can You Share Your Personal Experience of Gimmel Tammuz? »