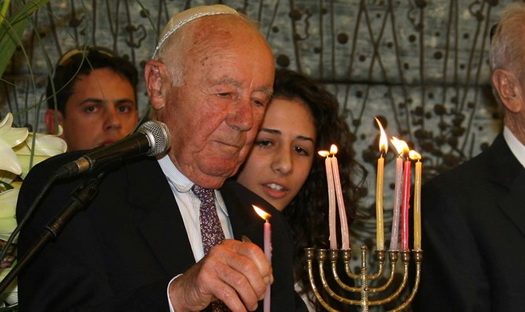 The last surviving fighter from the 1943 Warsaw Ghetto uprising by Jewish partisans against the Nazis died on Saturday in Israel at the age of 94.

Simcha Rotem, who was born in Warsaw in 1924 as Kazik Ratajzer, served in the Jewish Fighting Organization that staged the uprising as the Nazis conducted mass deportations of residents to the death camps.

Hundreds of Jewish fighters began their fight on April 19, 1943, after the Nazis began deporting the surviving residents of the Jewish ghetto they had set up after invading Poland.

The insurgents preferred to die fighting instead of in a gas chamber at the Treblinka death camp where the Nazis had already sent more than 300,000 Warsaw Jews.

Speaking at a 2013 ceremony in Poland to mark the 70th anniversary of the uprising, Rotem recalled that by April 1943 most of the ghetto’s Jews had died and the 50,000 who remained expected the same fate.

Rotem said he and his comrades launched the uprising to “choose the kind of death” they wanted.

“But to this very day I keep thinking whether we had the right to make the decision to start the uprising and by the same token to shorten the lives of many people by a week, a day or two,” Rotem added.

Thousands of Jews died in Europe’s first urban anti-Nazi revolt, most of them burned alive, and nearly all the rest were then sent to Treblinka.

Rotem survived by masterminding an escape through the drain system with dozens of comrades. Polish sewer workers guided them to the surface.

He went on to participate in the 1944 Warsaw Uprising led by Polish resistance fighters against the Nazis.

“This evening, we part from Kazik, the young man who became Simcha Rotem, the last of the Warsaw Ghetto fighters. Kazik went back to the ghetto in 1942, at the age of 18, three months after his parents sent him to Radom so he could escape the fate of most Polish Jews. He heard what was happening in the ghetto and had to be there,” he said.

“When he got there, he found himself wandering amongst the ruins, searching in vain for voices and faces. He only found death and destruction. ‘I sat in those ruins,’ he said in his testimony, ‘not knowing exactly where I was, but I knew I was in the ghetto. ….I imagined that I was the last Jew in the ghetto, or in all of Warsaw.’”

“Kazik was not the last Jew in the Warsaw Ghetto. He joined the uprising and helped save dozens of fighters, including two of its leaders, Antek Zukerman and Zvia Lubetkin. When he immigrated to Israel after the war, Kazik established a home and a family and served the country in a range of positions that he could only have dreamed of when he sat, head in his hands, desperate and terrified in the ruins of the ghetto. The man who thought he was the last Jew in the ghetto and in all of Warsaw, became the last living fighter of the Warsaw Ghetto uprising.”

“When asked about the message he would want to pass on to Israeli youth, he answered: “To be a human being. We are animals on two legs. No more than that – that’s what I think, that’s what I feel. But amongst us animals, the two-legged ones, there are some who are also human beings, and who deserve the name.”

“Thank you for everything, Kazik. We promise to try, every day, to be worth of the name ‘human being,’” the President concluded.

Prime Minister Binyamin Netanyahu said, “On behalf of all the citizens of Israel, I express my condolences over the passing of Simcha Rotem, the last fighter in the Warsaw Ghetto Uprising. Kazik (as they called him then) fought the Nazis, saved Jews, immigrated to Israel after the Holocaust and told the story of his heroism to tens of thousands of Israelis. His story and the story of the uprising will accompany our people forever. May his memory be a blessing.”