« Use Airbnb? Not in The West Bank
Sifting Through the Burnt Embers of Paradise » 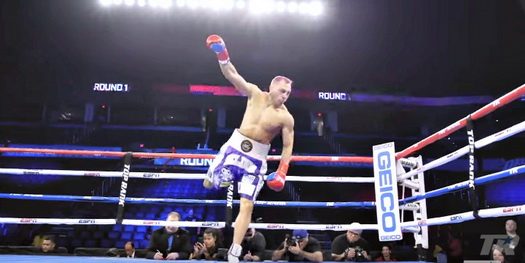 New York Jewish boxer Cletus Seldin has returned to the ring with a spectacular victory over Nicaraguan contender Nelson Lara.

Known as the “Hebrew Hammer” because of his fierce punching style, Seldin won the bout with a K/O in just 26 seconds. Friday night’s fight in Oklahoma City — Seldin’s first after a ten-month absence for surgery on an elbow damaged in a fight last December against Yves Ulysse — took the New Yorker’s knockout percentage to a staggering 74 percent, or 17 of a total of 22 fights. Seldin has been defeated just once in his career, by Ulysse.

As the fight with Lara got underway, Seldin sprang from his corner, landing two strong left jabs against the Nicaraguan in the center of the ring and quickly sending him to the ropes. As Lara attempted a recovery, Seldin dodged a right hook before countering with a series of explosive punches that again pushed his opponent’s back towards the ropes. As Seldin landed a powerful shot to the liver, Lara crumpled, remaining on his back as the referee counted down to ten.

The victorious Seldin said later that he had come “to Oklahoma to take care of business and that’s exactly what I did.”

Seldin continued: “I am ready to take on the best in this division whether that be the winner of tonight’s main event, or another title holder at 140 lbs.” Seldin’s super lightweight bout with Lara was the undercard event to the main fight on Friday between Maurice Hook and Alex Saucedo — which Hook won in the seventh round.

Veteran boxing promoter Joe DeGuardia lauded Seldin’s performance against Lara, a respected fighter with nine knockouts to his name. Prior to the fight, Lara even told Seldin that he’d “picked the wrong guy to make a comeback against.”

“‘The Hammer’ is officially back with a first round liver shot,” DeGuardia said. “I am confident that Cletus Seldin is one of the hardest hitting super lightweights in the world, and I believe that he would be a thrilling fight with any title holder in this division.”

Watch the “Hebrew Hammer” land the knockout blow against Lara in Round One:

« Use Airbnb? Not in The West Bank
Sifting Through the Burnt Embers of Paradise »