« Hate Crime Charges Dropped in Crown Heights Assault
8:00pm: Can We Go to a Non-Religious/Non-Chassidic Therapist? » 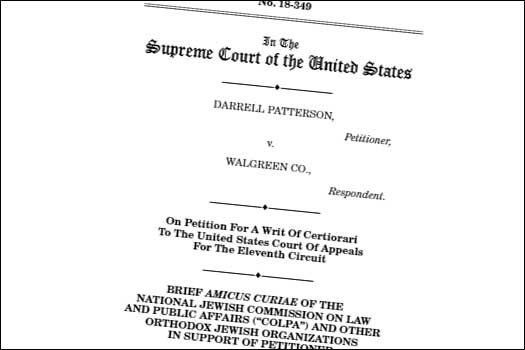 A new initiative being pushed by ten Jewish organizations, and written by Nathan Lewin, would remove a legal block for Shomer Shabbos workers.

Ten Orthodox Jewish organizations have urged the U.S. Supreme Court to nullify a Supreme Court decision issued in 1977 that severely limited the effect of a provision of the Civil Rights Act enacted to assist Sabbath-observers. In the 1977 case (Trans World Airlines, Inc v. Hardison), a majority of the Supreme Court ruled that a 1972 amendment to the employment provisions of the Civil Rights Act required only minimal accommodation for an employee’s religious observance. As a result of the 7-to-2 decision, Jewish and Christian Sabbath-observers have been unable over the past 40 years to enforce accommodation to Sabbath-observance and other religious practices that the law prescribes.

The brief filed by COLPA (the National Jewish Commission on Law and Public Affairs) argues that in 2000, the Supreme Court explicitly overruled that “broad reading” of the Establishment Clause as applied in two other Supreme Court rulings of 1975 and 1977 – Meek v. Pittenger and Wolman v. Walter. As such, the breif asks the Supreme Court “to accord the same polite burial to Hardison as the Court gave 18 years ago to Meek and Wolman.”

Mr. Lewin said, “The entire Supreme Court, including Justices Gorsuch and Kavanaugh who have expressed great support for religious liberty, should be ready to eradicate this terrible impediment to religious observance in private employment. Since Justices Brennan and Marshall dissented in the Hardison case the ‘liberal’ wing of the Court should also agree that the time has come to give Sabbath-observers the full legal rights that Congress contemplated in 1972.”

The groups that signed the friend-of-the-court brief are:

▪Agudas Harabbonim of the United States and Canada

« Hate Crime Charges Dropped in Crown Heights Assault
8:00pm: Can We Go to a Non-Religious/Non-Chassidic Therapist? »